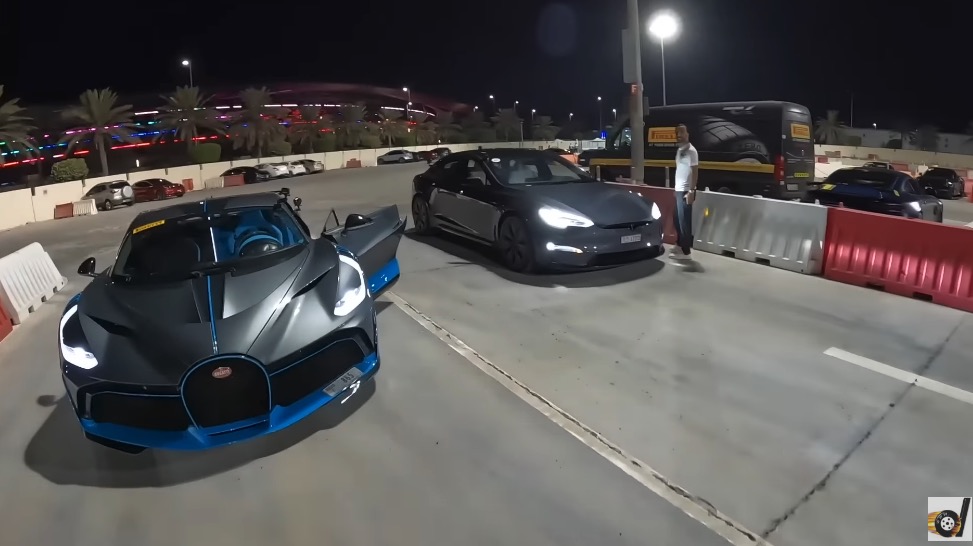 A new video shared by Drag Times shows the Bugatti Divo facing off against a Tesla Model S Plaid in a series of 1/4-mile drag and roll races.

The video’s host, Brooks Weisblat, headed to Dubai to race using a private drag strip rental at Yas Marina Drag Way. On the way into the drag strip, he was greeted by Bu Mayood of the Super Cars Majilis group.

While the Bugatti Divo has 1,500 hp, the Tesla Model S Plaid has just around 1,000 hp, as Weisblat points out in the video.

In addition to the Bugatti and Tesla, the Model S Plaid also faces off against a Ferrari Fiorano SF90.

In the video’s description, Weisblat notes that the Bugatti Divo has a $10 million price tag and was imported into Dubai from the U.S. Comparatively, the Tesla Model S starts at $135,990, at least for those in the U.S.

Weisblat recently took on the $3.6 million Bugatti Chiron with the Tesla Model S Plaid, though the results of the drag race series were quite different than in this race.

Overall in the 1/4 mile, the Divo ran at 9.2 seconds setting an unofficial world record for an ICE production vehicle, while the Model S Plaid ran 9.4 seconds. Tesla has yet to unlock the full top speed of the Model S Plaid.

You can watch the full series of drag races below, complete with a few races between the Model S Plaid and the Bugatti Divo.