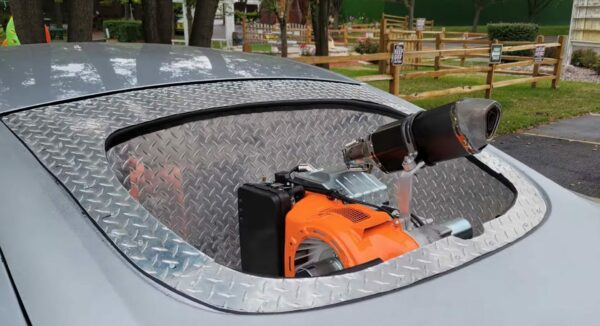 Tesla’s electric vehicles (EVs) are known for needing to be charged every so often, but one YouTube channel host has taken on a project to answer what would happen if he didn’t need to charge his Tesla.

A new video shared on Monday by the engineering YouTube channel Warped Perception shows a Tesla Model S that was outfitted with hardware to let it drive 1,800 miles (2,896 km) without stopping at a charging station.

Warped Perception Host Matt Mikka talks about the project, which he calls a “cordless Tesla,” after he created a Model S that effectively charges itself while driving or idling.

The cordless Tesla includes a generator burning gas which keeps it charged, and while the build sacrifices the Tesla’s zero-emission construction, it’s a pretty impressive build from an engineering standpoint and is definitely worth a watch.

“This is the first version of the cordless Tesla which is burning gasoline to charge the car instead of the conventional plug-in charger,” said Mikka in the video. “The car not only charges itself while it’s sitting and parked but also while driving the entire time.” This is a wild experiment nonetheless.

Mikka also clarifies in the video description that he did have to stop for five to six hours per day to help the car keep itself charged, despite charging while it’s driving.

You can see the full “Cordless Tesla” video from Warped Perception below, featuring a gas-burning generator that kept the vehicle charged on the trip. Don’t try this at home?