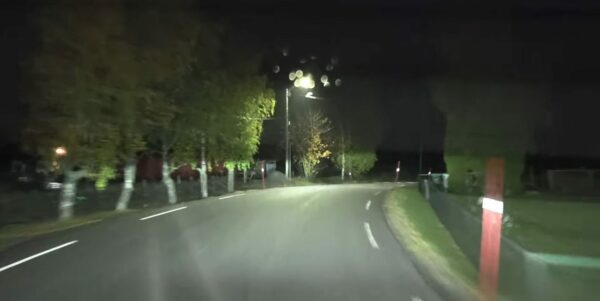 As Volkswagen’s ID Buzz electric bus makes headlines upon its first drives, one YouTube host has shared how the vehicle’s headlights work in a video.

Bjørn Nyland shared a new video showing off the adaptive matrix headlights on the Volkswagen ID Buzz on Sunday as he drives around back roads in Norway.

In the video, Nyland is driving through slightly rainy weather on what looks to be country roads with no street lamps.

Nyland also questions if these LED headlights are better than those on the ID.3 and ID.4, and he definitely says they’re better than many of the other vehicles he’s tested.

He also states that he’s pretty impressed with the Buzz’s adaptive lighting, including moments triggering the manual mode to turn them up to full brightness and distance. On high, the beams show a clear view at things that are several meters ahead, and the adaptation of the headlights seems fairly intuitive along the drive.

Nearing the end of the drive, Nyland goes on to call the Buzz’s headlights “some of the best headlights out there,” also exclaiming several times in the video when the lights became super bright or adapted impressively to oncoming traffic.

Tesla vehicles have adaptive LED matrix headlights, but the automaker has yet to release a software update to fully take advantage of the hardware.

Volkswagen launched ID Buzz pre-orders back in May in Germany and Europe, with the van’s pre-orders expected to hit the U.S. and Canada in 2023.

Volkswagen shared its next-generation ID.3 on Friday, set to be fully unveiled to the public in the spring, according to a press release from the company. Customers can order their next-generation ID.3 models now and can expect to receive deliveries from Q4 2023. The new version of the Volkswagen ID.3 will initially be produced at […]
Peter McGuthrie
27 mins ago

Volkswagen Group and its battery company PowerCo are searching for their first North American gigafactory location with eyes on Canada, according to a press release shared on Thursday. The companies are in discussion with the Canadian government to help identify sites that would be suitable for cathode material production. PowerCo will also work with materials […]
Peter McGuthrie
23 hours ago