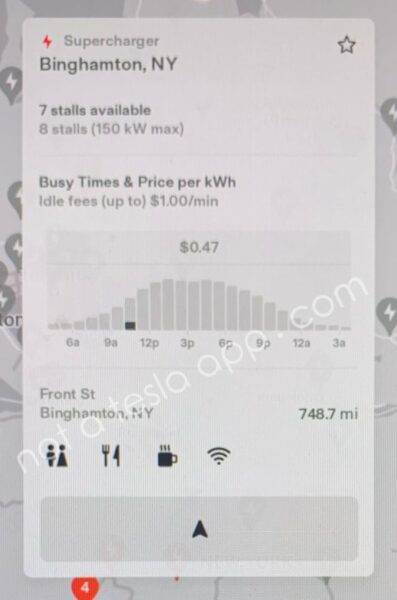 Photo: Not a Tesla App

Tesla software update 2022.36 includes a newly designed pop-up map feature for Supercharger locations, as detailed by Not a Tesla App on Monday.

The pop-up map includes information such as the number of available charging stalls, though Tesla has also added details on a site’s vacancy in the past for better planning, and the fees for the individual site.

Tesla’s newest updates to the Supercharger pop-up map also include showing exactly how busy a site is in real-time, or at any particular time in the day. The chart is similar to what you see on Google when checking out a business and how busy it is during the day.

In short, the feature is expected to help improve option availability for road trips, allowing drivers to pick the best time to arrive at a given station.

The new feature is particularly useful because of Tesla’s move to time-of-use rates in several regions, with the new map making it easier for drivers to check the price per kW at a given Supercharger station.

Additionally, the pop-up map shows max power at stations, as well as nearby services such as Wi-Fi, restaurants, coffee and rest stops, all with the tap of the Supercharger button.

Tesla has changed its estimated delivery times on all models in China, with the order configurator page now saying all Model 3 and Y trims will be delivered in “December 2022” (via @Tslachan). Previously, each trim and model displayed one to five weeks for estimated delivery. The change comes as Tesla seemingly pivots to focus […]
Peter McGuthrie
40 mins ago

Long-term vehicle rental service Autonomy has launched an end-of-year sale that lets users subscribe to a Tesla Model 3 for what it is calling the “lowest price anywhere” for the electric sedan. Customers need to put down a $3,000 deposit and then pay $450 per month for the first 12 months, said Autonomy earlier this […]
Peter McGuthrie
1 hour ago