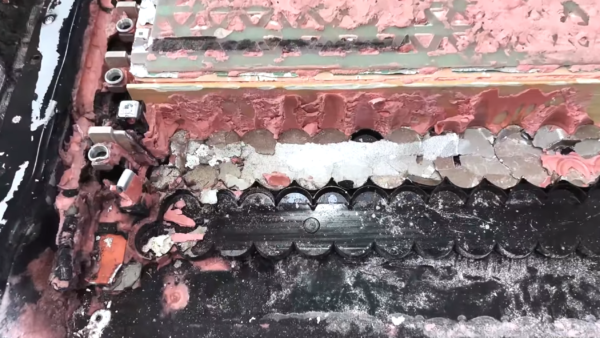 The team at Munro & Associates has slowly been making its way through an in-depth teardown of the Tesla Model Y’s 4680 battery, and in a new video, the firm is finally looking at the layers of adhesive surrounding the battery cells.

The two also look at the cooling foam which includes very small channels for fluid to flow through, in order to help keep the structural battery pack cool while running. The foam wraps around the battery pack’s insulation adhesive exterior.

Antonio talks about the BMS boards on the outside of the cells, and how they include positive and negative terminals to let current flow.

BREAKING: MUNRO LIVE reports that for the 4680 pack – “In true Elon fashion….there are 69 batteries to each bandolier” 🔥🔥😂😂😂@ajtourville @SawyerMerritt @elonmusk pic.twitter.com/nqob1gYhqP

Additionally, Cory goes on to talk about how the bottom of the battery cells is actually not glued on as he expected — meaning that much of the “structure” of the pack comes from the cells themselves and the top layer, rather than coming from the bottom.

A demonstration of 16-cells attached in a row was shown to be extremely rigid and not breaking, even when applying human force. The pink foam helps make all the 4680 cells incredibly strong as one unit.

You can watch Antonio and Cory break down the structural adhesive in Tesla’s Model Y 4680 battery packs on Munro Live below: