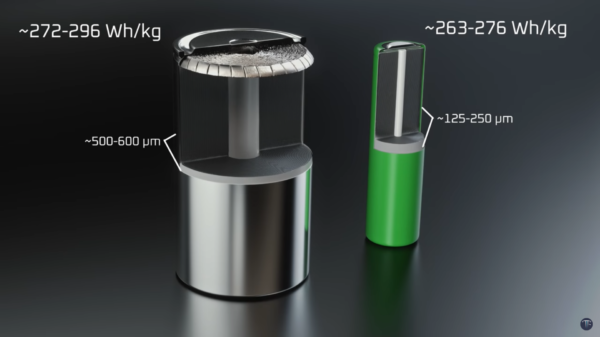 Tesla’s 4680 battery cells have maintained curiosity in the public eye, and as many await answers about what’s going on inside that structural battery pack, one YouTube channel has answered the call.

A new video shared by YouTube channel The Limiting Factor shares some of the initial specs of Tesla’s next-generation 4680 battery cell.

The host, Jordan, notes that the video is not meant to be a deep dive, but rather, is supposed to be a basic, initial look at the battery cell’s specs upon tearing it apart. This cell was a pre-production cell he notes, not one from final assembly found is a production vehicle.

Jordan references the ongoing Munro Live 4680 battery cell teardown video series, and he notes that, while Munro & Associates have the newest version of the Model Y with the 4680 battery cell structural pack, The Limiting Factor team has one from about six months ago with a slightly different makeup.

As a result, Jordan also says that the team didn’t spend a lot of time doing a deep dive into this 4680 battery cell, since it’s an old version of the structural pack anyway.

The Limiting Factor team will eventually plan to share a video tearing down the newer 4680 battery cell, following Munro & Associates’ video on the hardware.

You can watch the full video discussing the Tesla Model Y 4680 battery cell’s specs below, as they get into some technical detail. Battery nerds, unite:

Plugin vehicle shares in the UK reached 22.4 percent, up from 21.6 percent year over year, according to CleanTechnica. The figure is made up of battery-electric vehicles (BEVs) at 16.9 percent and plugin hybrid electric vehicles (PHEVs) at 5.5 percent of the overall market share. A year ago, these figures landed at 15.2 percent and […]
Peter McGuthrie
15 hours ago