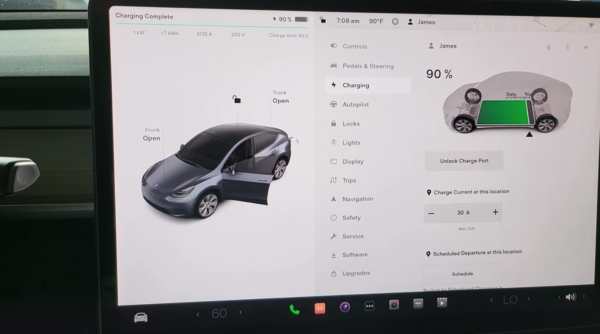 Tesla’s Model Y with 4680 battery cells has been delivered to a few buyers, and one of them has just shared a new test of the vehicle while parked using Sentry Mode.

Spoken Reviews shared a battery-drain test with the 2022 Tesla Model Y on Sunday, focusing on how the battery performs while using Sentry Mode.

The test takes place over the course of six days, and the host, James, measures the battery’s degradation while he was traveling and using the Sentry Mode feature.

As a side note, James notes that there were 433 Sentry Mode events which could have activated the camera for various reasons — be it flies, bees, humans or otherwise.

As for the battery test, the experiment began with the vehicle at 90 percent charge.

After six days of being parked in an airport parking lot with Sentry Mode engaged, the vehicle had 47 percent battery left, meaning that it dropped by 43 percent during the time parked.

James noted that the experiment was a little bit disappointing, but added that it’s about the same performance with Sentry Mode battery drain as with Tesla’s other batteries.

You can see the full battery-drain experiment with Sentry Mode activated here: