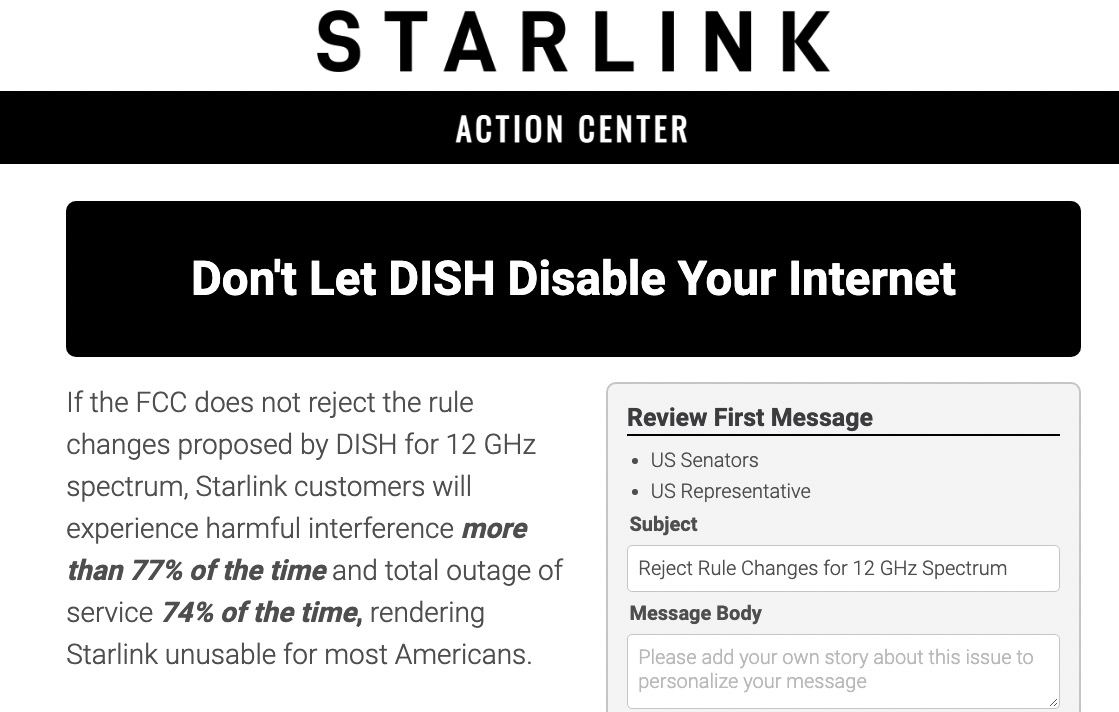 SpaceX last week asked Starlink subscribers to help the company convince the U.S. Federal Communications Commission (FCC) to reject changes to the 12 GHz spectrum proposed by DISH Network that would render Starlink “unusable for most Americans.”

According to PCMag, more than 70,000 Starlink customers heeded SpaceX’s call. As of Tuesday, the FCC has received a flurry of 71,292 (and counting) comments registering disapproval of DISH’s plans. American television and satellite provider DISH Network is seeking rights to parts of the 12 GHz band that SpaceX’s high-speed satellite service operates on for a 5G cellular network. However, two different services operating on the same spectrum bands is a big no-no. One of them would inevitably end up blocking the other.

SpaceX said in its original petition that if DISH succeeds, “Starlink customers will experience harmful interference more than 77% of the time and total outage of service 74% of the time, rendering Starlink unusable for most Americans.”

Starlink has been a gamechanger for those that previously didn’t have access to affordable, high-speed internet. It’s no surprise to see users coming out in droves to protect the service.

“We recently got Starlink and for the first time since we bought our house 20 years ago we have good internet service,” one subscriber named Dave Michaels wrote in their message to the FCC. “If this rule is accepted we will be forced back into paying more for a lower quality experience.”

If you’re a Starlink subscriber in the U.S. and want to help SpaceX, head over to the company’s VoterVoice petition.

Earlier this month, DISH also urged the FCC to disable Starlink connections being used on moving planes, boats, and other vehicles without regulatory approval. SpaceX has since received FCC approval to operate Starlink on moving vehicles.

Image credit: u/MRizkBV Last month, SpaceX obtained a license in Qatar to offer its satellite internet service in the Middle Eastern nation, ahead of the current World Cup being hosted in the country. Now, we see SpaceX has debuted an on-street demo of Starlink, operating a trailer showcasing the satellite internet service’s capabilities. You can […]
Sarah Lee-Jones
2 days ago

Along with its own Starlink launches, SpaceX also provides launches for several other companies, government agencies and more. In one such launch, the company successfully launched a satellite for Eutelsat into geosynchronous orbit on late Tuesday evening. SpaceX successfully launched the Eutelsat 10B mission on Tuesday using its Falcon 9 booster. The first stage was […]
Peter McGuthrie
5 days ago