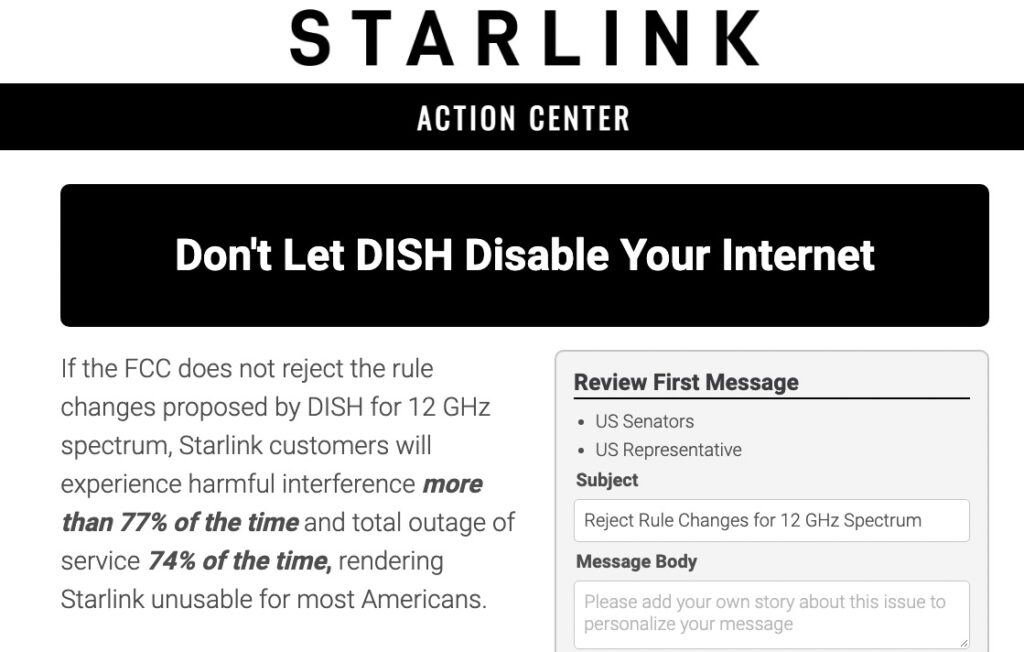 SpaceX has been sending emails to Starlink customers asking for their help fighting American television and satellite provider DISH Network’s attempts to claim rights to the 12 GHz spectrum band that Starlink operates on.

Take a look at the email in question below, as shared by David McCarthy (@Andy8671025): 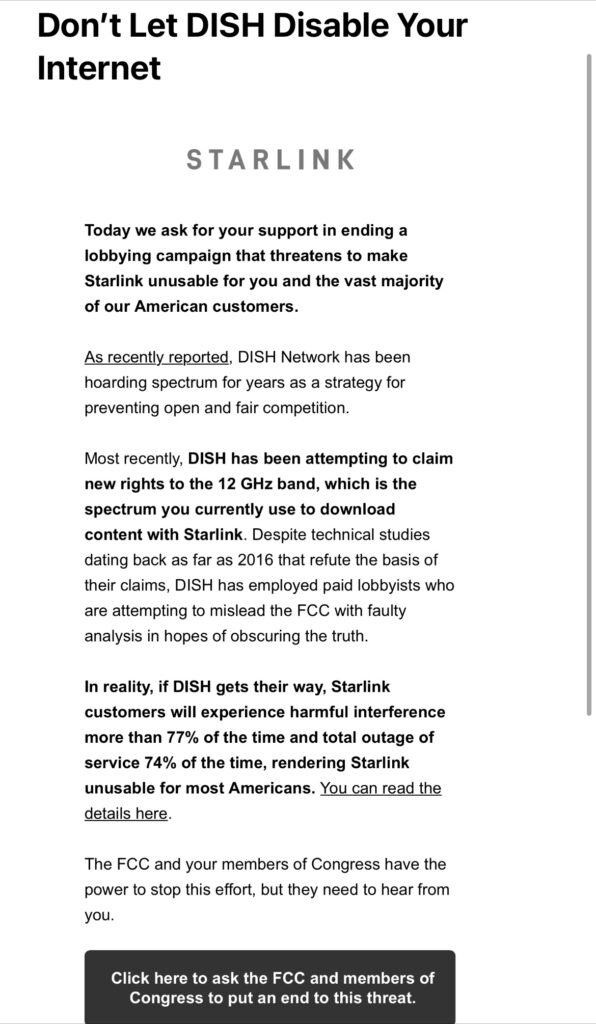 “Today we ask for your support in ending a lobbying campaign that threatens to make Starlink unusable for you and the vast majority of our American customers,” SpaceX wrote in the email.

The company went on to cite a recent report alleging that DISH has been hoarding spectrum for years without actually using it to stifle competition. Now, the satellite and television operator is seeking to acquire airwaves in the 12 GHz band that would clash with SpaceX’s Starlink coverage.

Two different services operating on the same spectrum bands is a massive problem, as one would inevitably end up blocking the other.

SpaceX said that if DISH succeeds, “Starlink customers will experience harmful interference more than 77% of the time and total outage of service 74% of the time, rendering Starlink unusable for most Americans.”

During Q1 2022, Starlink’s median download speeds in the U.S. exceeded 100 Mbps. It outmatched all other satellite internet services and was only slightly behind fixed broadband providers.

Internet intelligence firm Ookla recently reported that download speeds on Starlink increased 38% year-over-year in the U.S. It added that SpaceX provides “a life-changing service for consumers in rural areas that might not otherwise have access to high-speed internet.”

The email provides customers with a link to where they can register their opinion with the U.S. Federal Communications Commission (FCC) and members of Congress.

“If the FCC does not reject the rule changes proposed by DISH for 12 GHz spectrum, Starlink customers will experience harmful interference more than 77% of the time and total outage of service 74% of the time, rendering Starlink unusable for most Americans,” explains SpaceX.

“Ask the FCC and members of Congress to put an end to this threat by entering your name, email and address in the form below,” notes SpaceX.

Earlier this month, DISH also urged the FCC to disable Starlink connections being used on moving planes, boats, and other vehicles.

In early November, SpaceX announced a new Fair Use policy for its Residential customers in the US and Canada, along with all Business and Maritime customers. The new policy was set to begin in December 2022, but now SpaceX has delayed the policy, according to an update on its website. The plan would offer up […]
Sarah Lee-Jones
1 hour ago

The Federal Communications Commission (FCC) approved SpaceX to launch up to 7,500 next-generation Starlink satellites on Thursday, according to a report from CNBC. “Our action will allow SpaceX to begin deployment of Gen 2 Starlink,” said the FCC. The approval is only for part of SpaceX’s application for Starlink next-gen satellites. The company wanted 10,800 […]
Peter McGuthrie
5 hours ago