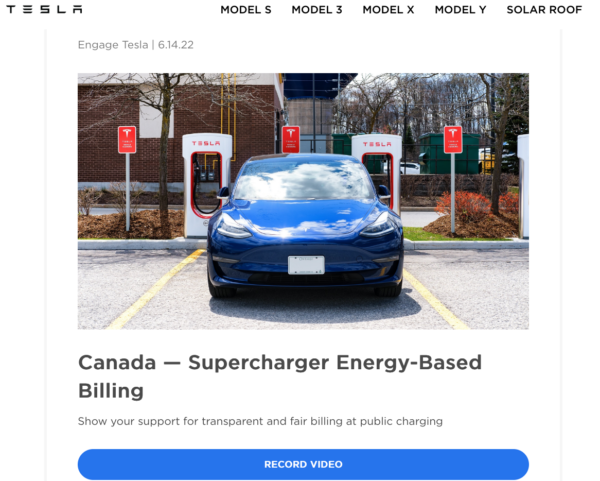 While Canadian electric vehicle (EV) owners pay for electricity in the time it takes to charge, rather than the amount of energy used, Tesla is requesting that its fans in the country help to change that.

Tesla is asking customers and fans to submit comments on why Measurement Canada should move to an energy-based billing model rather than the time-based system it has in place at the automaker’s Superchargers, as detailed on Tesla’s website.

On the website, Tesla offers the ability to either record a video of yourself explaining why you think the rules should be changed, or to submit a text-based comment.

Tesla ‘Considering’ Next Factory in Canada and Mexico: Report https://t.co/dz4oQ2Cn6P

Tesla explains that, to overturn the system in question, Measurement Canada must temporarily change the rules while creating a new framework for rules that lets customers be charged via electricity used instead of time.

In an explanation on the website of what onlookers can do, Tesla wrote, “The Minister of Innovation, Science and Industry, the Hon. François-Philippe Champagne, has the power to intervene to allow energy-based billing at EV chargers today, and until such time as Measurement Canada finalizes its metering rules and a reasonable retrofit period can be provided.”

Tesla continued, “Given Minister Champagne’s ongoing support for good EV policy – along with the Minister of Natural Resources, the Hon. Jonathan Wilkinson, who has created leading EV infrastructure programs that are also impacted – we are optimistic that the government will step in and do the right thing for EV drivers.”