Tesla occupied the top three spots for electric vehicle (EV) registrations in the United States during the first quarter of the year according to Experian data — reports Automotive News.

Tesla had a killer Q1, delivering 310,048 vehicles worldwide and reporting a record $18.7 billion USD in revenue. EV sales in the U.S. as a whole grew 60% during the quarter, and Tesla dominated the market in the country’s EV mecca of California.

Hyundai, which saw its sales surge substantially, trailed behind Tesla in second place for total EV registrations by brand. The South Korean automaker delivered a total of 15,414 EVs in the U.S., split between four models from both its Hyundai and Kia brands. 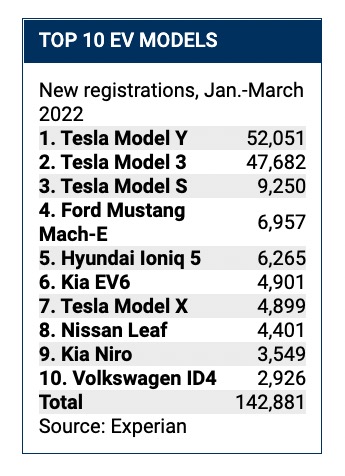 Hyundai has made a decisive commitment to electrification under the leadership of Hyundai Motor Group Executive Chair Euisun Chung. The company is already starting to see the results of its labor.

Hyundai itself is amazed by the success it saw during Q1, which points to a bright future for the automaker in the EV space. “We ourselves are positively surprised by the fact that we have significantly increased our EV sales even to become No. 2 in the market,” Muñoz told Automotive News.

Model Y rivals from both the Hyundai and Kia brands, the Ioniq 5 and EV6 respectively, are priced up to $22,000 lower than Tesla’s electric crossover offering, but the latter has a 15-year headstart in the market over which it has cemented itself as the global leader in EVs.

Ford Motor Co. ranked third for EV registrations by brand, with 7,407 new EVs registered. The Mustang Mach-E accounted for 6,957 of these new registrations.