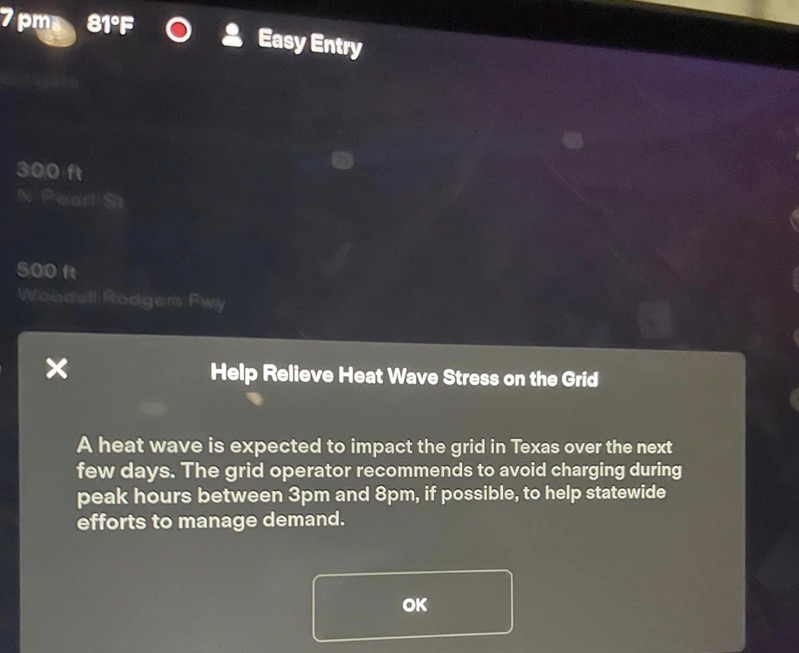 Tesla has utilized its in-car messaging to alert owners in Texas of an upcoming heat wave and how they can “help relieve heat wave stress on the grid.”

A message received by Model 3 owners reads, “a heat wave is expected to impact the grid in Texas over the next few days. The grid operator recommends to avoid charging during peak hours between 3pm and 8pm, if possible, to help statewide efforts to manage demand.”

Model 3 owners shared the screenshot on Facebook and Reddit, with many complaining about Electric Reliability Council of Texas (ERCOT) and its management of the grid in the state.

On Friday, six power facilities went offline in Texas and residents are being asked to conserve power this weekend, as temperatures are expected to soar to 100F in San Antonio.

“We’re asking Texans to conserve power when they can by setting their thermostats to 78-degrees or above and avoiding the usage of large appliances (such as dishwashers, washers and dryers) during peak hours between 3pm and 8pm through the weekend,” ERCOT said in a press release.