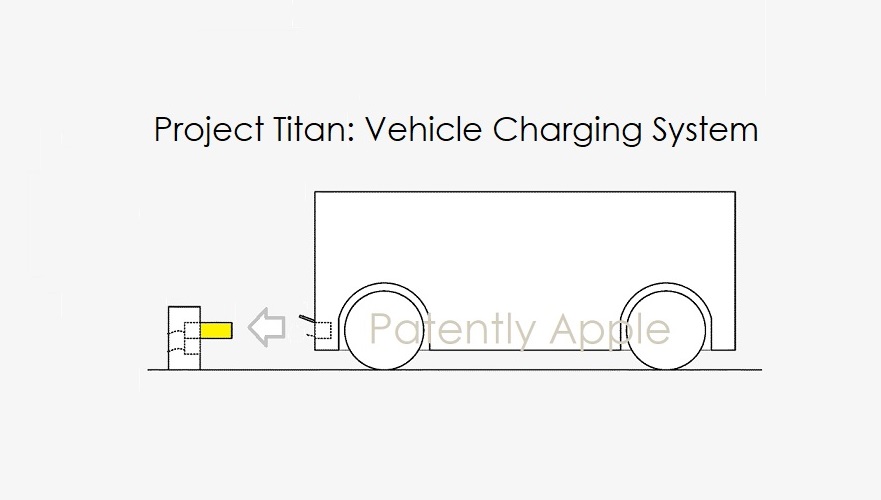 Image: US Patent and Trademark Office (via Patently Apple)

Apple has officially been granted a new patent from the U.S. Patent and Trademark Office (PTO) for an electric vehicle (EV) charger featuring a docking process that would allow for both autonomous charging and for drivers to be able to charge without ever leaving their car — reports Patently Apple.

The automotive industry as a whole is looking towards cars that will be able to drive themselves without even needing a human in the driver’s seat — be it Tesla’s planned robotaxis or Apple’s “Project Titan,” which has been touted as a fully autonomous EV from the very beginning.

EVs wouldn’t really be fully autonomous if a human had to plug them in to charge whenever they needed more juice, though, would they?

The EV charger imagined in Apple’s new patent solves that problem with a charging plug that does not need to be manually connected and is instead mounted using one or more passive translation stages that can change position to link to the vehicle.

A car’s charging receptacle can be largely lined up with the charging connector by simply driving it, either under manual control or through autonomous driving technology, with finer adjustments for the docking being made automatically by the charger.

This is the second major patent relating to Project Titan that we’ve seen over the past week, with the first detailing autonomous driving tech with support for voice commands and an advanced “Guidance System” that fine-tunes final destinations.

Back in August of 2015, Tesla showed off a ‘snake’ charger prototype for the Model S, consisting of an automatic arm plugging in a charger automatically into the vehicle.

When asked about the autonomous ‘snake’ charger in October 2020, Tesla CEO Elon Musk confirmed the project is still alive: