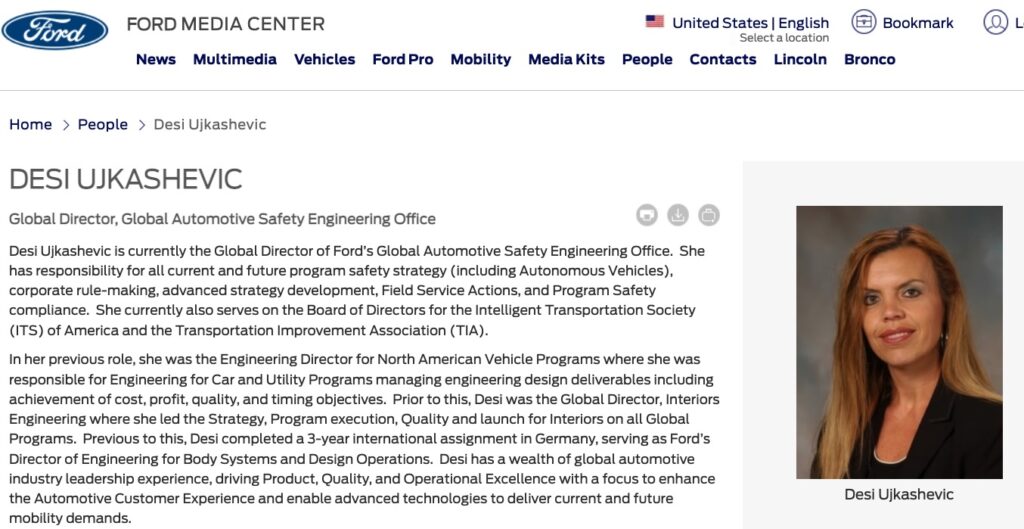 Apple has recruited Desi Ujkashevic, a former Ford Director of Auto Safety Engineering, for its self-driving vehicle project, according to sources familiar with the matter and as reported by Bloomberg.

Ujkashevic worked at Ford since 1991 prior to the switch, and before working as a director for safety engineering, she oversaw interior, exterior, chassis and electrical componentry for several of the automaker’s vehicles.

In particular, Ujkashevic worked on the Ford Escape, Explorer, Fiesta and Focus models, in addition to the Lincoln MKC and Aviator, as detailed on her LinkedIn page.

While Apple declined to comment on the news, Ford noted that Ujkashevic retired from the automaker. Her LinkedIn page confirms she retired in March.

“I wanted to share with my LinkedIn Community that I have marked the end of my wonderful career with Ford Motor Company and a new beginning into my next Chapter. I just wanted to take a moment to thank Ford Motor Company, Bill Ford, and Jim Farley for providing me great opportunities to contribute to Ford and for their leadership and support of me over my career. I am honored to have served Ford Motor Company,” said the Ford veteran last month.

According to Ford, Ujkashevic was among the company’s highest-profile managers and was named an executive on the automaker’s website.

In March, a report said Apple’s self-driving car project had “been dissolved for some time,” though it didn’t stop the company from continuing to seek long-term suppliers for the project.

However, Apple’s self-driving car project added more registered test drivers in March than it had previously had, further emphasizing the company’s intention to keep working on the project — internally dubbed “Project Titan.”

Apple is aiming to launch a self-driving vehicle as soon as 2025, though it has faced a handful of executive and managerial departures over the past year.