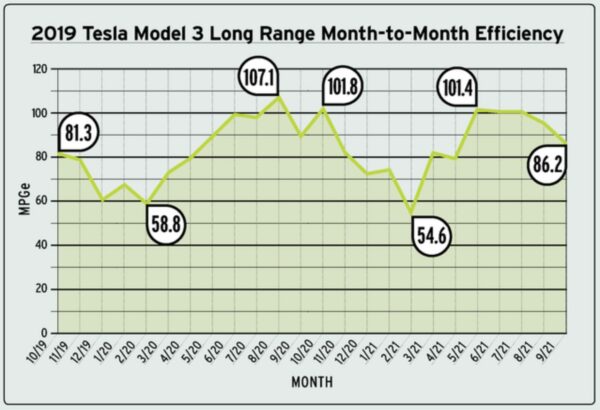 After two years of driving a 2019 Tesla Model 3 around Michigan, Car and Driver found that the EV’s efficiency varied significantly from month to month — largely depending on the temperature outside, based on stats from third-party software TeslaFi.

Delivered to the team’s Ann Arbor, Michigan headquarters in 2019, the Model 3 was expected to endure all four seasons during the test — and it did.

In the test, which accounted for around 40,000 miles driven, the publication found that the car’s average MPGe was at 81 to start, with the worst month overall seeing a low of just 55 MPGe amidst 27-degree average temperatures.

Though the vehicle’s efficiency dropped almost immediately, it tended to average around 59 MPGe over 1,075 miles of driving, representing just 48 percent of the EPA’s initial combined rating.

When parked in cold weather, battery drain also remained an issue, though keeping a cabin warm with no other functionality was possible. Cold winter weather affects batteries in general and EVs are no exception.

In a separate test, the team found that the Model 3 could keep the cabin at 65 degrees for 45.1 hours in sub-freezing temperatures.

Tesla’s Model Y and Model 3 have dominated EV sales in Q1 in the U.S., and are expected to ramp up higher based on the automaker’s growth guidance of increasing deliveries by over 50% year-over-year.

If you’re planning to finance your next Tesla purchase in the United States, rates have increased to kick off the fourth quarter. As noted by Waiting4Tesla.com (@w4tsla), financing rates for Model S/X and Model 3/Y on the Tesla website in the U.S. have increased 0.25%, now showing as 4.74% (previously 4.49%). Tesla partners with major […]
Sarah Lee-Jones
28 mins ago

Tesla on Friday held its annual AI Day event to showcase the company’s latest leaps in Artificial Intelligence, automation, and computation. The event kicked off with Tesla showing off the first working prototype of of ‘Optimus,’ the long-awaited Tesla Bot. Despite merely being a prototype, Optimus was able to walk out on stage, wave to […]
Nehal Malik
2 hours ago

Tesla kicked off its 2022 AI Day by showing off a demo of its Optimus robot. The Optimum bot was able to walk out on stage on its own, wave to the crowd and even ‘raise the roof’ to music. Optimus was shown lifting boxes, working in a factory doing some light work and even […]
Sarah Lee-Jones
14 hours ago