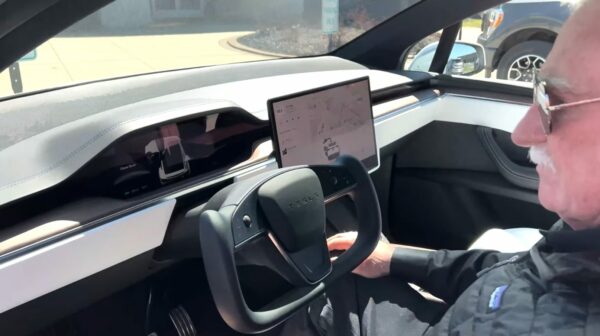 Just weeks after the first 2022 Tesla Model X Refresh deliveries hit Canada, one of the foremost automotive experts has gone hands-on with the new SUV.

To start, Sandy and Chris look at the vehicle’s interior, before moving on to the exterior and before taking the vehicle for a drive.

The Model X includes a steering yoke just like its Model S refresh sibling, which Munro is a fan of.

Munro says the back seats of the Model X actually feel better than those in the Model S. He also applauds the luxurious finish of the interior.

In the video, Munro says, “I’ve changed my mind on what is the best car. I’ve decided to move away from the Model S Plaid. Don’t send hate mail — I like this better.”

Chris says that the Model X with the same specs is currently around $120,000, with base Autopilot and not including the automaker’s Full Self-Driving (FSD).

During the test drive of the vehicle, Munro notes how well the Model X handles, even at high speeds on the freeway.

You can watch Sandy’s full discussion of the Tesla Model X with Chris from DirtyTesla below.

China’s new-energy vehicle (NEV) sales dropped in the last week of November, as was measured by insurance registrations. BYD with its hybrid electric vehicles doubled Tesla’s sales to top NEV leaderboards in China during the fourth week of November, with BYD overseeing 38,480 insurance registrations while Tesla had 16,121, according to a report from CnEVPost. […]
Peter McGuthrie
1 hour ago

After Tesla stepping up its hiring efforts in Thailand earlier this year caused some to expect an upcoming launch in the country, the automaker has officially announced plans to start selling cars there. In a post on LinkedIn, Tesla shared a photo with text in Thai translating to “Hello Thailand,” and saying “See you December […]
Peter McGuthrie
3 hours ago