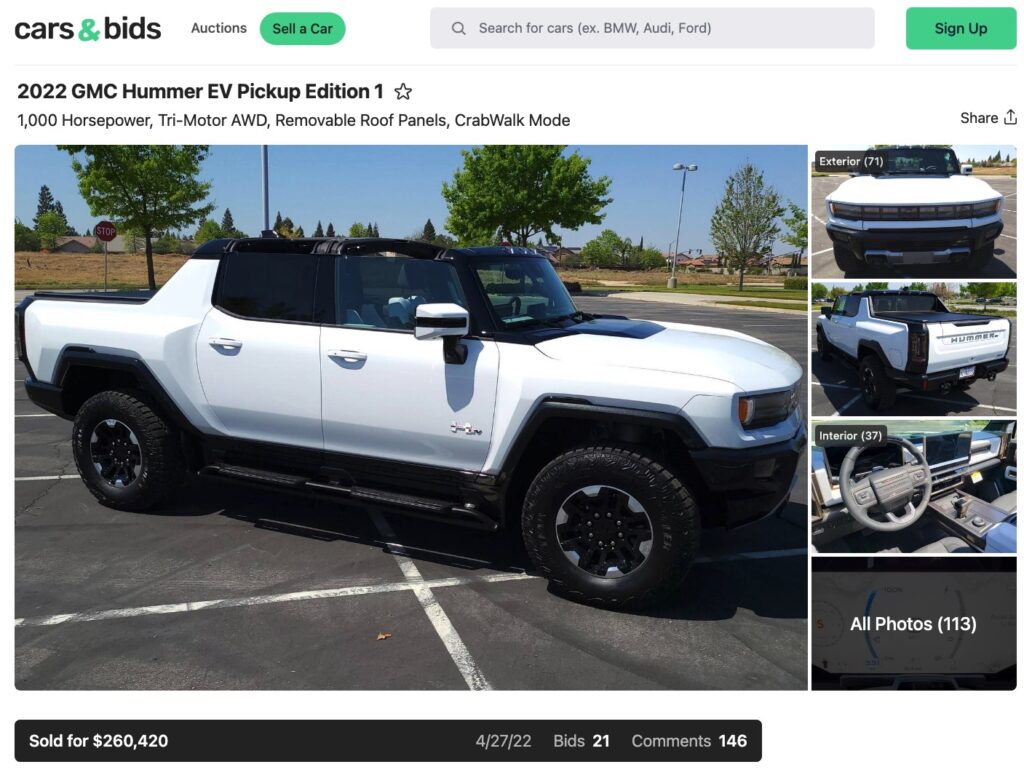 The first round of reviews for the GMC Hummer electric vehicle (EV) hit the web this month, with some of them even selling for as much as $250,000.

Bidding wars over GMC’s Hummer EV saw two of the electric pickups selling for over $250,000 each, one of which sold for $260,420, according to electrek.

The price is staggering, given the fact that the vehicle’s starting price for the base-level variant that’s coming in 2024 is just $80,000, while the currently available model starts at $112,000.

To be sure, the Hummer EV’s demand is super high, with GMC reporting over 65,000 reservations for the electric Hummer.

GM also only delivered around 99 units of the EV in Q1, so dealership auctions have become a chaotic web of high bids — with the top-selling Hummer EV going for $260,420.

The Hummer was an Edition 1 that sold with just 85 miles on the odometer, both helping to push the price even higher.

As a result of high demand, GM is set to increase production of the Hummer EV, though many customers still won’t receive their units until around 2024. It remains to be seen if Hummer EV production can meet demand and actually deliver to customers.

The Hummer EV also features a 329-mile range, with a battery that outweighs a Honda Civic.

General Motors (GM) is set to launch more than 15 electric vehicles in China by 2025, according to statements from the automaker during its Tech Day event on Tuesday in Shanghai. The EVs are set to be launched on GM’s Ultium drivetrain, and the company expects to have an annual production capacity of about one […]
Peter McGuthrie
4 days ago

Domino’s announced plans to order custom-branded Chevy Bolt electric vehicles, set to receive 100 this month with 700 more rolling out in the coming months, according to a press release from the pizza company on Monday. The fleet will consist of 2023 Chevy Bolt EVs, which are set to arrive at select franchise and corporate […]
Peter McGuthrie
6 days ago