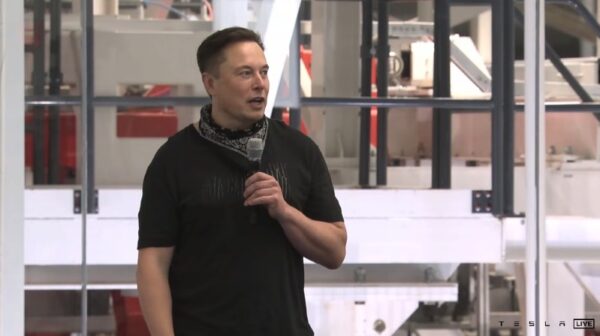 After a judge ruled Tesla CEO Elon Musk’s 2018 tweet saying he had “funding secured” to take Tesla private was false, a new court filing shows some of Musk’s messages around the time of the tweet.

A 300-page motion filed on Friday as a part of the lawsuit shows a text message thread between Musk and Saudi Arabia’s Public Investment Fund during the 2018 period when the Tesla head tweeted he had “funding secured” to take the automaker private, as reported by Bloomberg.

In a tweet on Monday, @ElonMusk alluded to the messages, noting that Al-Rumayyan “committed unequivocally to take Tesla private” with him, a move that was also “witnessed by the Tesla CFO and several others” and was why he claimed funding had been secured.

The head of Saudi PIF committed unequivocally to take Tesla private with me, as witnessed by the Tesla CFO and several others. That is why I said funding was secured.

The filing shows texts exchanged weeks after the 2018 tweet in question, including one series in which Musk detailed that Saudi Arabia’s PIF Head Yasir Al-Rumayyan had betrayed the previous handshake agreement made in person.

The court filing shows Musk’s iMessage history from his iPhone at the time, with most starting at page 122.

In the texts, Musk wrote, “This is an extremely weak statement and does not reflect the conversation we had at Tesla. You said you were definitely interested in taking Tesla private and had wanted to do so since 2016.” Musk added, “I’m sorry, but we cannot work together.”

“It’s up to you Elon,” wrote Al-Rumayyan in response.

After more back and forth, and Musk claiming the Saudi PIF was “throwing [him] under the bus,” Al-Rumayyan asks Musk to read an article from Bloomberg reporting that the fund was talking about taking Tesla private.

“I read the article,” Musk said. “It is weak sauce and still makes me sound like a liar. It is filled with equivocation and in no way indicates the strong interest you conveyed in person.”

Musk recently shared more on his side of the story in regards to his ‘funding secured’ tweet, in an interview at the TED Conference in Vancouver, BC, Canada.

On Monday, Musk added, “The San Francisco office of the SEC were shameless puppets of Wall St shortseller sharks, while doing nothing to protect actual shareholders. That is why I lost all respect for them.”

The San Francisco office of the SEC were shameless puppets of Wall St shortseller sharks, while doing nothing to protect actual shareholders. That is why I lost all respect for them.

In the end, Tesla did not go private and remained a publicly-traded company, and proceeded to mass-produce its new Model 3 electric sedan at the time.

Tesla highlighted its accomplishment on Tuesday of opening Supercharger stations to non-Tesla electric vehicles (EVs) across 15 European countries, which it says is equal to about 50 percent of Supercharging stalls in all of Europe. The announcement was made from the new @Tesla_Europe Twitter account. The Supercharging network is now open to all EVs in […]
Peter McGuthrie
21 hours ago

Indonesian President Joko Widodo said he is “confident” Tesla will finalize an investment into a production facility in his country, according to a report on Tuesday from Reuters. President Jokowi, as he is colloquially referred to in Indonesia, also highlighted potential benefits such as tax breaks for the company or a concession to mine nickel. […]
Peter McGuthrie
21 hours ago

Tesla is looking to increase production output at its Gigafactory Shanghai in the next two months, to help meet the demand created by its recent price cuts, according to a source with knowledge of the plan and a planning memo seen by Reuters. The memo says that Giga Shanghai is targeting a weekly average output […]
Peter McGuthrie
22 hours ago