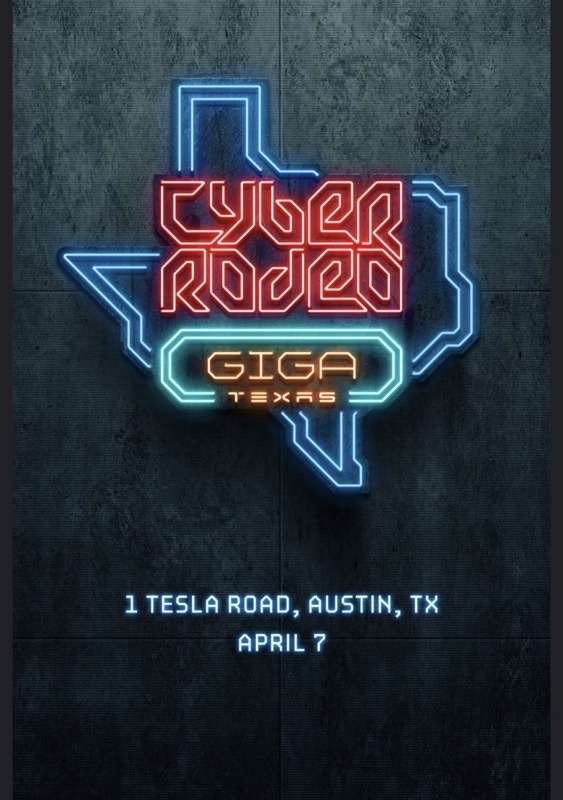 That’s according to an image of the invite shared by CEO Elon Musk, with the party set to take place at 1 Tesla Road, in Austin, Texas on April 7, 2022.

Tesla’s email says “Save the date. Cyber Rodeo. Austin, TX”, according to an email shared by James Locke (@arctechnic). Tesla plans to manufacture its Cybertruck at Giga Texas.

What do we have here. This is going to be fun! @Tesla Cyber Rodeo! pic.twitter.com/prPzyHhLn3

“You’re invited to the Cyber Rodeo at Giga Texas. All guests will receive a +1 invitation. More information to follow next week,” reads the email invite, according to Locke.

Tesla recently received its permit approval to proceed with its grand opening party at Giga Texas, which is set to hold tours of its new 8 million square foot factory, plus have live music on two stages and have the capacity for up to 15,000 people. Some environmental groups tried to push back on the party, but for now, it looks to be proceeding as planned.

Did you get an invite to Tesla’s ‘Cyber Rodeo’ at Giga Texas? Time to check your spam folder in your email, just in case.

Tesla’s Gigafactory Texas is reportedly aiming for 75,000 units of the Model Y in the first quarter of 2023, according to an unnamed source who shared the information with electrek. The figure equates to more than 5,000 units per week at the site for the entire quarter, marking a significant production increase from the 1,000 […]
Peter McGuthrie
10 hours ago

As Tesla heads into the final month of the year, the automaker is looking to boost customer orders with a new discount option for its flagship sedan and SUV models. Tesla is offering a $3,750 discount on Model 3 and Model Y orders in North America, as seen in a text message sent from the […]
Peter McGuthrie
12 hours ago