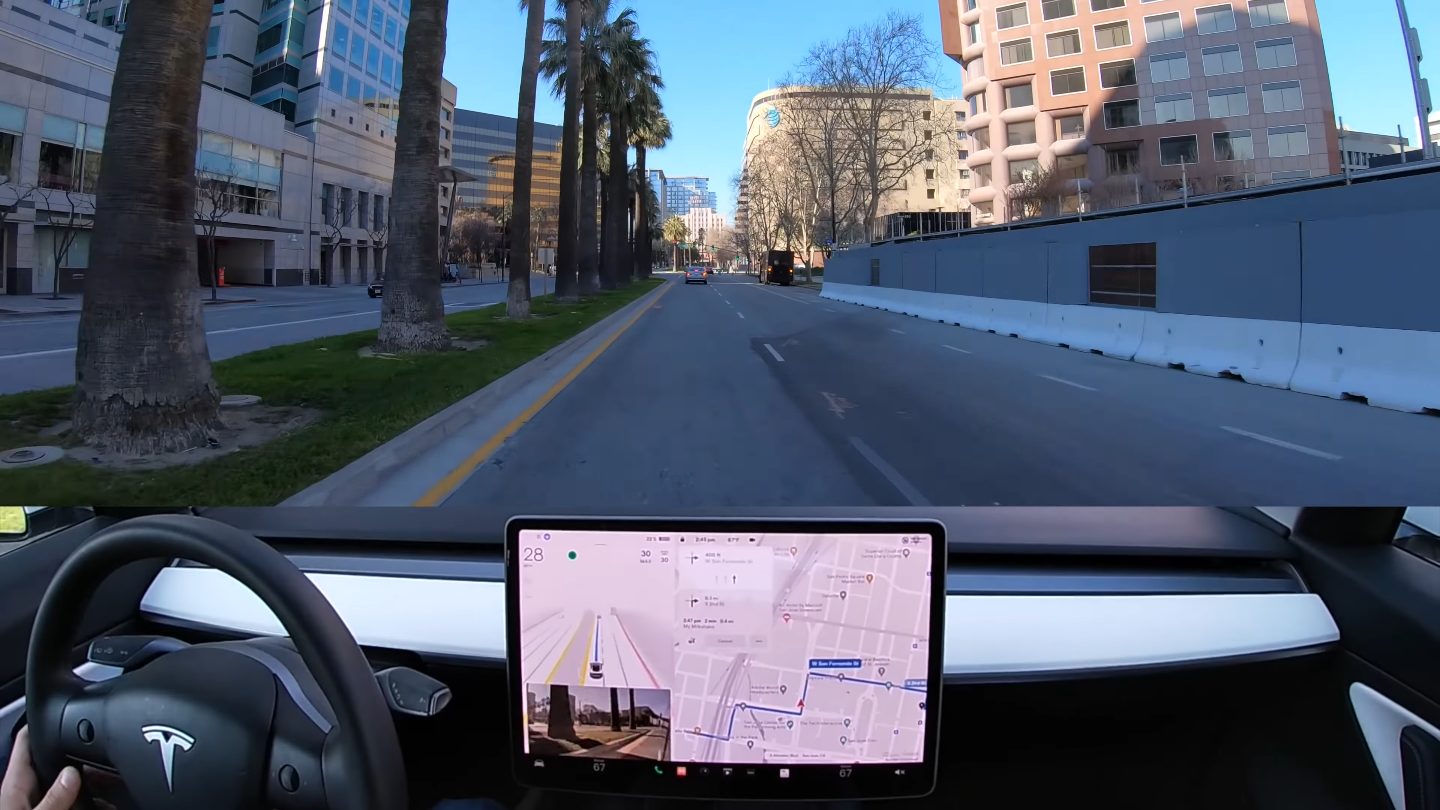 Bernal started working for Elon Musk’s electric vehicle (EV) company as a data annotation specialist in August 2020 in an office in San Mateo, California. Bernal eventually moved into the role of advanced driver assistance systems test operator, before being dismissed by Tesla in the second week of February this year.

Shortly after he started working at Tesla, Bernal personally bought a 2021 Model 3, partly because Tesla offers employees free access to Full Self-Driving, the company’s suite of driver assistance features which then cost $8,000 USD and today costs $12,000 USD upfront or $199 per month as a subscription in the U.S.

The FSD Beta is a set of advanced driver assistance features, the most notable among them being ‘Autosteer on city streets,’ that is currently undergoing a public testing phase.

Amazed by what he saw as Tesla’s “potentially life-saving technology,” Bernal started his YouTube channel in February 2021 to drive around Silicon Valley and show people exactly what the public version of FSD Beta could do. Bernal is just one of many FSD beta testers who document their experiences on YouTube.

Bernal’s YouTube channel depicted a candid FSD beta testing experience, which included both the good and the bad of the technology. In one video from early February, Bernal’s Tesla ran into a plastic bollard on the streets of San Jose while FSD beta was engaged.

The video, which depicts what the YouTuber says was “the first FSD beta collision caught on camera that’s irrefutable,” has since amassed more than 185,000 views. Bernal was dismissed by Tesla shortly after he posted the video, but his written separation notice did not include the reason for his firing.

Before Bernal was dismissed, he says his managers verbally told him he “broke Tesla policy” and that his YouTube channel was a “conflict of interest.”

However, the YouTuber noted that he was always transparent about his YouTube channel, both with his superiors at Tesla and with the public, and that he wasn’t aware of any company policy at Tesla barring him from creating car tech reviews on his own time using his own property.

Bernal told CNBC that his YouTube content never disclosed anything that Tesla had not already released to the public. “The FSD Beta releases I was demonstrating were end-user consumer products,” he said.

After he was fired from Tesla, his FSD beta access was also revoked, even though he had not gotten any “strikes” for unsafe driving or improper use of the technology. Tesla monitors FSD beta testers’ driving behavior using “Safety Scores,” and drivers are usually allowed several strikes before their access is revoked.

“I still care about Tesla, vehicle safety and finding and fixing bugs,” said the YouTuber. Despite losing access to the FSD beta in his own Tesla, Bernal has obtained access to other vehicles with the system enabled and plans to continue reviewing it for his YouTube channel.

When AI Addict first revealed he was a Tesla employee in YouTube comments months ago, many were surprised he had admitted the fact, while he was sharing FSD videos online. If Apple employees were to share negative news about the company’s products on YouTube, it’s likely a similar fate would have happened.

Last week, Tesla CEO Elon Musk declared himself a “free speech absolutist” as he refused to block Russian news sources from SpaceX’s Starlink network. Tesla has not responded to CNBC‘s request for comment on the situation as of yet.

The U.S. Securities and Exchange Commission (SEC) has launched a probe into Elon Musk for his role in directing the branding around Tesla’s self-driving car ambitions — reports Bloomberg. According to the publication, the efforts are part of the regulator’s ongoing investigation into Tesla’s claims surrounding its Autopilot and Full Self-Driving (FSD) features. SEC officials […]
Nehal Malik
10 hours ago