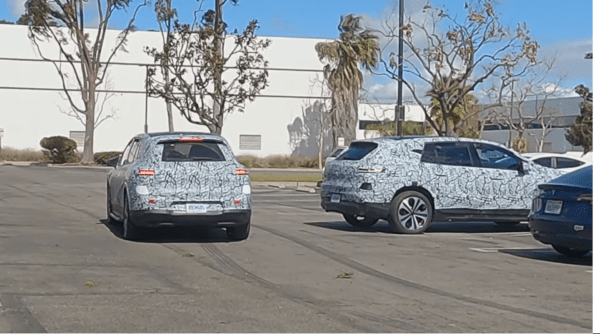 Mercedes-Benz has plans to launch six EQ electric vehicles (EVs) this year, and an upcoming SUV model has officially been spotted testing

In the video, originally from KindelAuto, the EQS models appear to have manufacturer license plates from Michigan, though the surrounding cars do seem to have California plates.

The so-called “spy shots” show the vehicles parked, while one of them drives away and heads down a nearby corner.

After one of the SUVs drives away, a person near the other one seems to address the camera person, before also getting into the vehicle.

While camouflage wrapping covers the EV’s exterior, including much of the head and taillights, the video catches a few brief glances at the interior of the SUV — though it’s hard to make out exactly what we’re seeing.

It’s not entirely clear if the SUV is a six- or seven-seater, though it appears much more spacious on the inside than the Mercedes EQS sedan.

The Mercedes EQS sedan starts at $102,310 in the U.S., and stands to be the automaker’s flagship for a large lineup of upcoming EQ vehicles — presumably including the SUV depicted below.