Merritt has mentioned that the source of his information is Troy Teslike (@TroyTeslike), and the duo have been credible sources concerning Tesla production and delivery timelines. This latest batch of tweets reveals that Tesla’s Fremont factory on Kato Road aims to produce its two millionth 4680 battery cell by the end of the month. 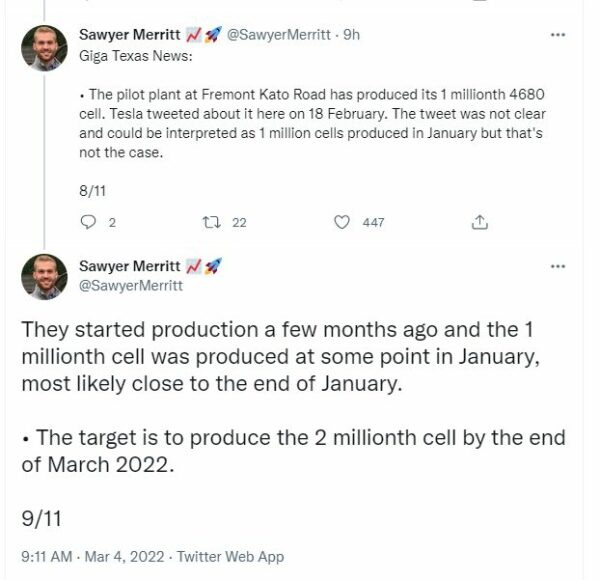 The American EV maker celebrated the production of its one-millionth 4680 cell just a couple of weeks ago.

A follow-up tweet mentions that “Giga Texas is currently not producing 4680 cells, but the machinery is installed and cell production is expected to start in early April 2022.” The Giga Texas factory is expected to have a grand opening party soon. More Model Y vehicles have been spotted on the site by the day, as final certifications are still pending.

The fact that the Texas factory would produce the 4680 cells was confirmed by Tesla CEO Elon Musk last month at the company’s Q4 2021 earnings call. Now we have a tentative date for when battery production will begin for these new structural packs for the Model Y.

Tesla’s new 4680 cells offer 6x the energy resulting in a 16% range increase and 6x the power compared to existing 2170 cells. Model Y vehicles from Giga Texas will be the first to use 4680 structural battery packs first unveiled at Tesla’s Battery Day presentation back in 2020.

Tesla supplier Panasonic recently stated it would start mass production of 4680 cells in 2024, while a recent report from Japan claimed the latter was eyeing a U.S. factory site in Oklahoma or Kansas.