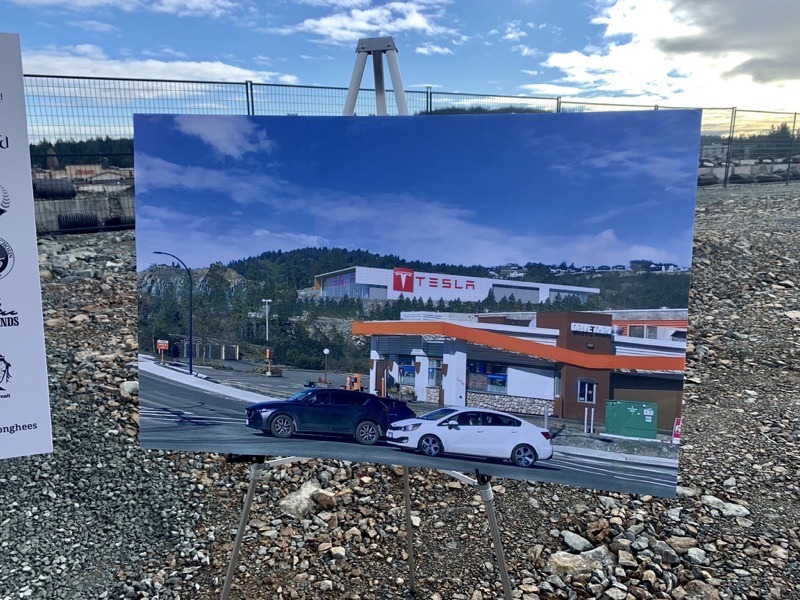 While previous reports had seemingly confirmed the location of the site in the Greater Victoria suburb of Langford, it was made official on Thursday.

Tesla and Langford announced this morning the new sales, service and delivery center will be located at 2361 City Gate Blvd, across from Costco at a Seacliff Properties condo development. A concept shows a massive building with “Tesla” adorning the side.

“This is the way of the future and a big part of Langford’s climate action plan,” Mayor Stew Young told the Times Colonist. “By 2027, all our fire and police vehicles, all the city trucks and cars will be electric. Having Tesla here will help us with that.”

Tesla’s new location in Greater Victoria is estimated to cost $40 to $50 million according to Young and will be completed by June 2023, with the facility at 35,000 square feet. Construction will begin next week, said Young.

The new Tesla location will have up to 50 full-time jobs and send roughly $295,000 into Langford through taxes.

GROUNDBREAKING | A #Tesla sales, service & delivery centre is coming to #Langford, near Costco. Mayor Young says construction on the 35,000 sqft facility starts next week and should wrap up by June 2023. @victoriabuzzes pic.twitter.com/ND2sWjn15u 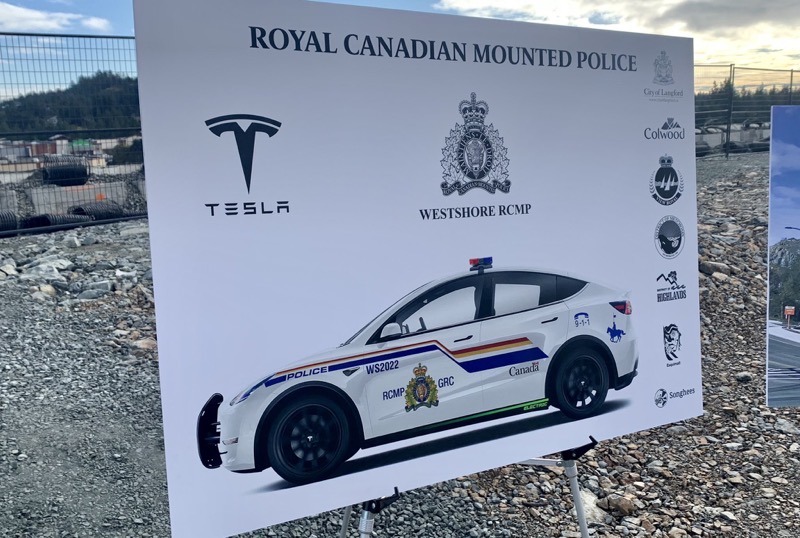 The Westshore Royal Canadian Mounted Police (RCMP) will also be adding a Tesla Model Y to its fleet, along with a Mustang Mach-E, said Young.

“They are very efficient and have a lot of power to catch the bad guys,” said the Mayor, who also noted he has been working with the developer for over a year to lure Tesla to Langford.

The upcoming RCMP Model Y is being outfitted in Ottawa at the moment, and will be the first Tesla patrol vehicle in Canada–at the West Shore RCMP.

“This is the first one for the Royal Canadian Mounted Police across the country,” said West Shore RCMP Inspector Todd Preston, to CTV Vancouver Island.

“When we knew that a Tesla dealership may potentially be here, we piggybacked off of that and said this would be an incredible site to try to test these vehicles,” said Preston, noting the Model Y will be arriving sometime in 2022.

While Tesla constructs its new location in Langford, a temporary location is set to open in Victoria at the former site of Ina Motors. Tesla also use Ferny’s Autobody in Victoria to service customer vehicles, while Fix Auto in Langford also is an authorized Tesla repair shop as well.

Recent weeks have brought on conversations about Tesla’s price cuts in markets around the world, and now the automaker is pushing a new message on its website for Model 3 leasing. Tesla’s Model 3 is now leasing at prices as low as $399 per month, according to a change on the automaker’s website yesterday, notes […]
Peter McGuthrie
9 mins ago

Investors just can’t get enough of Tesla’s stock, it seems. Around three million stock-option trades take place on an average day, and Tesla accounts for around 7 percent of all options on an average trading day, according to data from Cboe Global Markets, reports The Wall Street Journal. A stock option is a contract that […]
Peter McGuthrie
55 mins ago