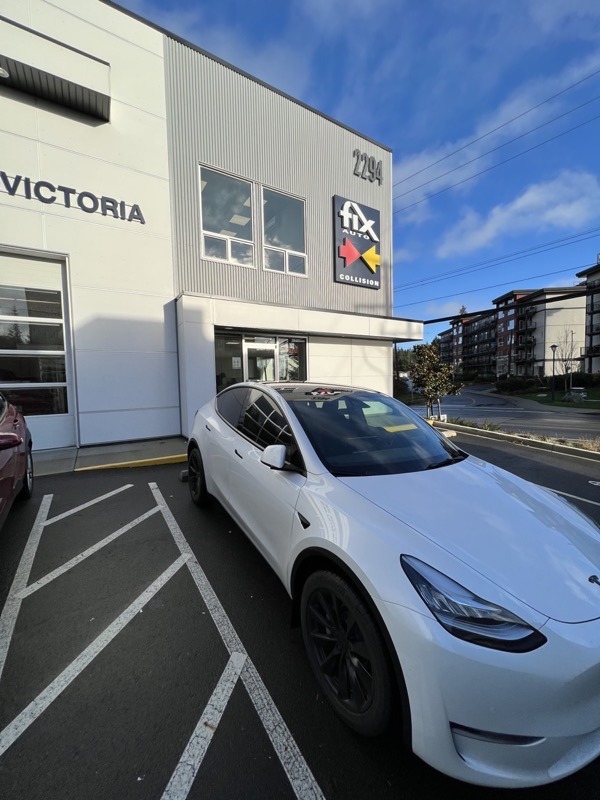 According to a Tesla North reader, Fix Auto joins Ferny’s Auto Body Shop as a Tesla-approved repair shop in the capital city of B.C.

A recent warranty issue was requested inside the Tesla app and this owner was told Fix Auto would be contacting them. A phone call ensued and Fix Auto completed some minor bumper repair, while arranging a courtesy vehicle as well, with the fix completed in two days, while also washing and vacuuming this particular owner’s Model Y as well.

“The shop was quick to let me know updates by phone and was very professional, plus did a great job on my warranty repair,” said Tesla North reader, Lindsay about her Model Y.

Fix Auto’s newest location is at 2294 Millstream Road in Langford and is steps away from the first upcoming Tesla location on Vancouver Island, also located in Langford across from Costco.

The original Fix Auto location is located at 2920 Jacklin Road and so far, many Tesla owners have been pleased with the shop’s repair services, according to Google reviews.

Electric vehicles (EVs) are becoming more popular in Europe with each passing quarter, and a new milestone has been reached with one of Tesla’s EVs at the forefront. The Tesla Model Y led Europe’s EV sales year to date through August, with 7,011 units of the electric SUV sold in the month, according to CleanTechnica. […]
Peter McGuthrie
12 hours ago