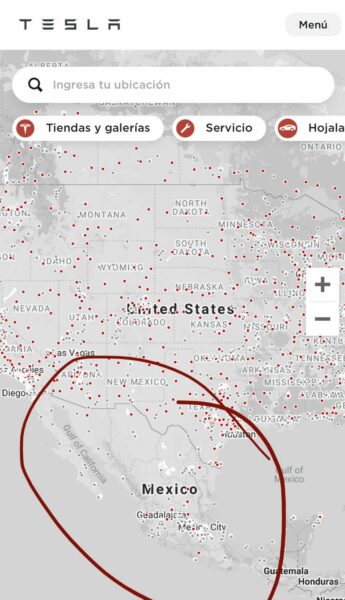 As Tesla continues to expand its Supercharger presence around the world, the automaker’s head has confirmed that new Superchargers will be headed to Mexico in the future.

@Tesla Owners Mexico asked Tesla CEO Elon Musk on Thursday if there could be more Superchargers installed in Mexico using a photo of Tesla’s active Supercharger stations across North America — to which @Musk responded with the 100 percent emoji.

The photo showed red dots for Tesla’s Superchargers, with the Tesla Owners account asking if there was “Any chance we can get more red dots here?”

A number of the dots on the posted map include upcoming Supercharger locations, many of which are set to be built during 2022.

The gray dots on the map also represent charging stations that include Tesla connectors, though they are not actual Tesla Superchargers.

Tesla Model Y deliveries rolled out in Mexico as early as 2020, on the tail end of the electric SUV’s delivery round across North America.

A number of Superchargers are also set to be installed throughout California in 2022 and more throughout the globe, as part of a recent Supercharger map update released by Tesla.

Tesla’s big AI Day 2022 is here and it is slated to start at 6:15pm PDT/9:15pm EDT from Palo Alto, California. The event is to recruit engineers to “build the future of AI”. According to the AI Day invite, attendees will “learn about Tesla’s latest developments in artificial intelligence, including Full Self-Driving, Tesla Bot, Dojo […]
Sarah Lee-Jones
1 hour ago

A set of photos shared this week show that Tesla’s Powerwall and Solar Roof are super durable and will continue working after exposure to storms, as noted by one roofing company. @Tesla retweeted photos of a Tesla Solar Roof and Powerwall that withstood winds and rain from Hurricane Ian on Thursday. The photos, originally shared […]
Peter McGuthrie
2 hours ago

Tesla’s global production of the Model Y and 3 is set for a sharp increase in Q4 with expectations of major growth in 2023, according to internal plans reviewed by Reuters this week. The growth is expected to happen due to Tesla’s Giga Berlin and Texas ramping up production substantially, putting the company on track […]
Peter McGuthrie
3 hours ago