The data comes from the Australian Electric Vehicle Council (EVC), which previously signed a new agreement with Tesla to publicize the EV pioneer’s sales figures in the country. 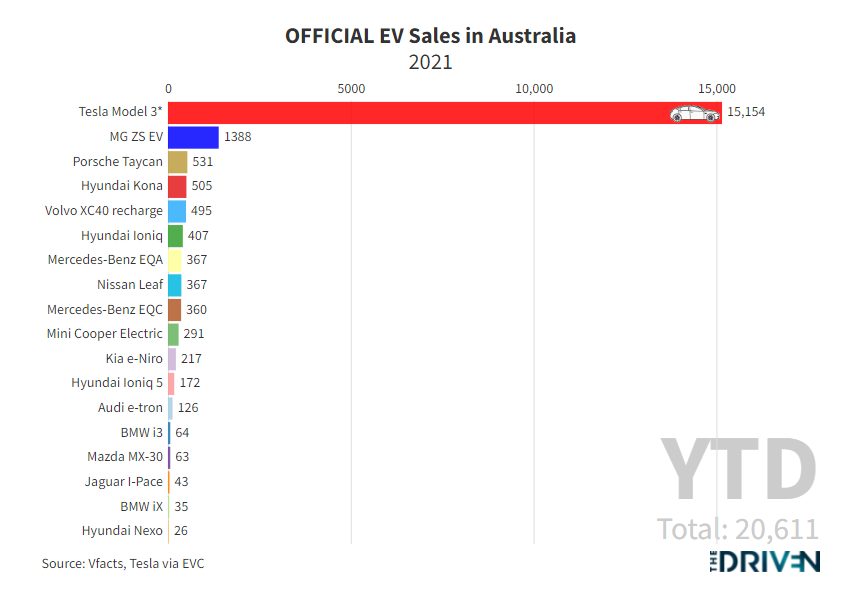 Tesla by far led Australia’s transition to all-electric vehicles in 2021, with MG and Porsche following far behind in second and third place, selling 1,388 ZS EVs and 531 Taycans respectively. The Model 3 also placed in the top 20 best-selling cars by volume in Australia across all drivetrains.

What’s more, Tesla was able to achieve all of that with the Model 3 being the only one of its mass-market vehicles available for sale in Australia since late 2019. Significant growth should be expected in the near future, with the EV pioneer gearing up to launch its Model Y CUV in the region.

New South Wales registered the most EVs of any Australian state during 2021, with Tesla leading the charge.

EV uptake in Australia lags behind other parts of the world, mainly due to a lack of policy support at the national level.

The country is looking to fix that, though, and three states — NSW, Victoria, and South Australia, for the first time introduced EV purchase rebates of $3,000 AUD in 2021 for cars meeting threshold requirements, along with other benefits such as stamp duty waivers and registration discounts.

EVC CEO Behyad Jafari also said that Australia does not have a demand problem for EVs — there’s plenty of that, but does have a supply problem.

Most carmakers simply aren’t allocating enough product to the Australian market for there to be units available for delivery year-round, so any automaker that is able to provide adequate supply to the region should be able to bolster sales moving forward.

Update January 31, 2021: The Driven has received a statement from the EVC, noting the Tesla numbers provided by the automaker were incorrectly stated.

The change means the Model 3 did not quite outsell the Toyota Camry at 13,081, but still managed some impressive sales numbers for 2021 in Australia.

A revamped Model 3 is under development at Tesla, according to four people familiar with the plans in a report from Reuters on Monday. The updated model, dubbed “Highland,” is expected to decrease overall complexity and reduce the number of components in the Model 3’s interior. Additionally, the new Model 3 will focus on factors […]
Peter McGuthrie
1 day ago