New South Wales (NSW) has the highest population of any Australian state, and a new report shows that the region has now passed an important landmark on its way to mainstream electric vehicle (EV) adoption.

NSW has surpassed a milestone of over 10,000 battery-electric vehicles (BEVs) registered in the state, according to The Driven.

Newly- released data from the NSW transport department shows that a total of 10,026 BEVs have been registered for road use, landing BEVs a total of 2.7 percent market share in the state. 6,144 (61 percent) of the BEV units are also Tesla vehicles. 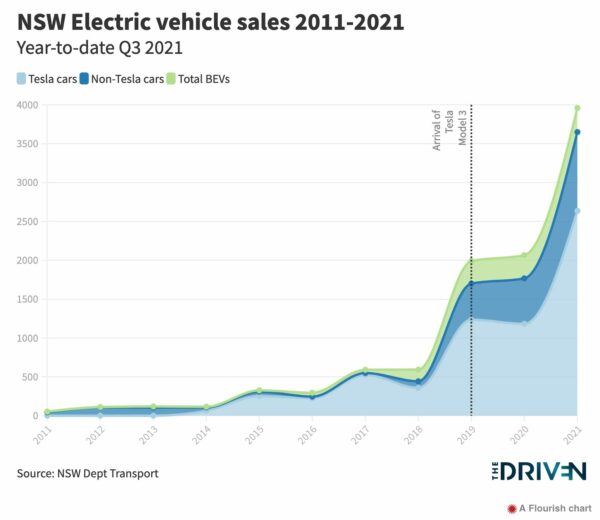 The data measures registrations through September 2021, the same month that new EV rebates and waivers were introduced offering up to a $3,000 CAD credit for the purchase of an EV.

These incentives will be capped at 20,000 vehicle purchases total, and the current quarter is the first time NSW drivers can use the programs.

Australia’s first V3 versions of Tesla’s Superchargers just opened earlier this year, and while the number of EV drivers still has a long way to go, Tesla will also need to continue expanding the charging infrastructure to accommodate the growing EV population.

In a recently published YouTube video, Brad Sloan gives us a high-fidelity aerial tour of Tesla’s Gigafactory in Austin, Texas, on the morning of Friday, November 25. While most of the workers had the day off for Thanksgiving, some contractors can still be spotted on the site. A fair amount of ready-to-deliver Model Y units […]
Nehal Malik
45 mins ago