Tesla Model 3 vs. Gas Car: How Long Can Heat Stay on in Freezing Cold?

Automotive publication Car and Driver on Friday published the results of a cabin heating test between a 2019 Tesla Model 3 Long Range and a gas-powered 2022 Hyundai Sonata N-Line, that sought to determine how long both cars could keep their cabins heated in subfreezing temperatures.

The test was spurred on by a recent cold snap in Virginia that shut Interstate 95 down for over 24 hours, stranding many cars and their occupants in harsh, freezing weather.

Car and Driver did not have heated seats turned on in either vehicle, and the Model 3 was nestled in Camp mode while the Sonata had its auto shut-off function, which shuts the car (and cabin climate control) off after 30 or 60 minutes of idling, disabled.

The Model 3 only used 2.2% of its battery pack for cabin climate control per hour, meaning it could theoretically have heated the cabin for a total of 45.1 hours or just under two days before running out of charge. 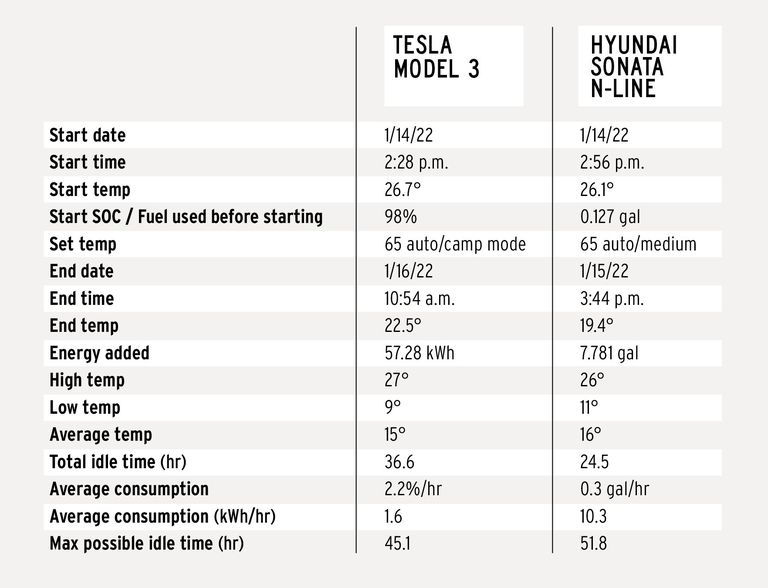 The Sonata was shut off after just over 24 hours, during which time it had consumed slightly less than a half-tank of fuel. The Hyundai consumed around 0.3 gallons of gas per hour to maintain cabin climate control while idling and could have kept going for a maximum of 51.8 hours on a full tank of gas before running out.

While the Sonata could have kept the heating on for some six more hours as compared to the Model 3, the latter was vastly more efficient as it didn’t have to keep feeding gas (or battery charge, to be more precise) into its drivetrain to simply keep climate control running.

It should be noted that the Model 3 used in this experiment by Car and Driver has racked up 40,000 miles on the odometer, with its 80.5 kWh battery pack losing 8% of its maximum capacity as a result.

The Model 3 also had the older resistive heater, and not the latest more efficient heat pump found on newer Tesla vehicles. It would have been even more interesting to see the results if Car and Driver had a Tesla with a heat pump.

Tesla introduced its heat pump with the 2021 Model 3 and 2021 Model Y. While heat pumps improve efficiency even further and have already proven themselves effective in the freezing cold, several Tesla owners have had their heat pumps spontaneously fail in extremely cold climates as of late.

Car and Driver concluded that “EVs aren’t necessarily much worse off in a cold-weather-disaster scenario,” and are much more efficient than a gas-guzzling equivalent.