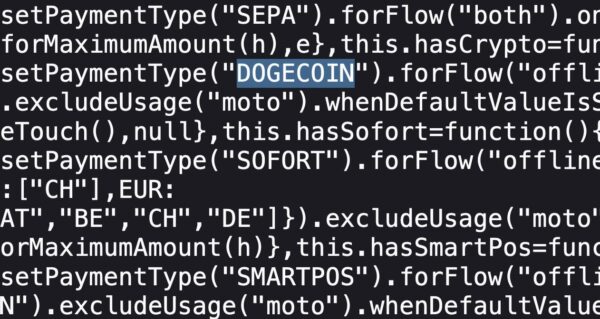 Tesla CEO Elon Musk said that the company will accept Dogecoin to pay for certain merch items last month, and one user has validated the claim using internal code.

A mention of Dogecoin can be seen in Tesla’s internal payment processing code, as pointed out on Tuesday by @TeslaShopBot.

The mention comes alongside what looks to be a command with the words “setPaymentType,” hinting that Tesla’s planned move to accept Dogecoin for some things may be imminent.

Dogecoin code has been spotted in Tesla's payment processing code, much WOW.https://t.co/feqH9w1zdH

In October, the code on Tesla’s website was also found to list Shiba and Bitcoin as payment options, also hinting that the automaker may be looking to re-introduce cryptocurrency to its accepted forms of payment.

Tesla and Musk have long been supporters of Dogecoin and cryptocurrency in general, with the automaker even having allowed Tesla buyers to pay in Bitcoin for a short time last year.

One developer also discovered over the summer that Dogecoin had been working with Musk since at least 2019.

Musk’s space exploration company SpaceX also launched the DOGE-1 Mission to the moon last year, which was paid for entirely by Dogecoin.

Almost a year ago, Musk also bought Dogecoin for his youngest son X Æ A-XII so he could be a “Toddler Hodler,” following widespread jokes about “hodling” (holding) Bitcoin.