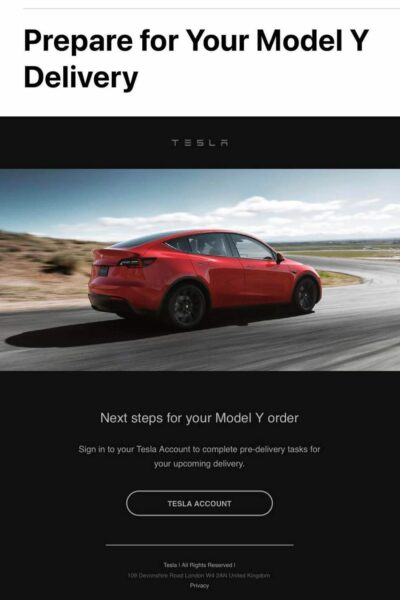 As Tesla expands its Model Y electric vehicle (EV) to markets in the United Kingdom, a number of reservation holders for the electric SUV are set to receive first deliveries of the vehicle, according to an email sent by Tesla.

Tesla is sending out emails to UK customers with Model Y reservations saying to prepare for delivery, meaning that the country’s first deliveries of the electric SUV are imminent, as shown in an email shared by @Tesla_Adri.

In the email, Tesla writes “Prepare for Your Model Y Delivery,” then encourages users to sign in to finish other pre-delivery items before taking delivery.

It's happening. Model Y deliveries in the UK are imminent.
Prepare for delivery mails going out now @elonmusk pic.twitter.com/bxSOzphFZb

UK Model Y units are currently produced by Tesla’s Gigafactory Shanghai, though that could change upon the company’s opening of the new Gigafactory Berlin-Brandenburg in Germany – which is expected to receive final approval for production sometime in early 2022.

A review of the Model Y in the UK last month asked viewers if the vehicle could be the country’s best electric SUV, as compared to Tesla’s Model 3 sedan.

Last year, the Tesla Model 3 became the second best-selling new vehicle overall in the UK, while the Model 3 also became the top-selling car in Switzerland, as praised by Tesla CEO Elon Musk.

In addition, Tesla was Norway’s top-selling auto brand overall in 2021, a major milestone in the journey towards electrification.