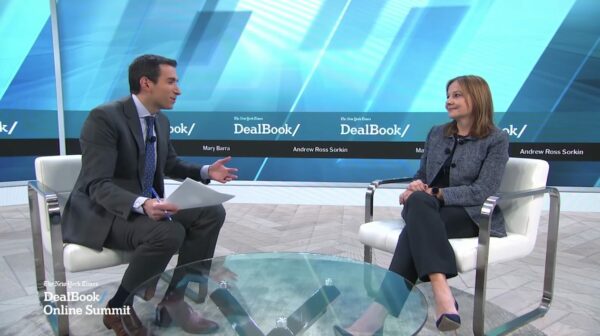 After the U.S. President Joe Biden snubbed Tesla in favor of unionized automakers in the recently-proposed electric vehicle (EV) tax credit increase, one company head is officially being questioned on why they’re getting different treatment.

In a video interview at The New York Times’ DealBook Summit between Andrew Sorkin and GM CEO Mary Barra, Sorkin pointed out that Tesla’s non-unionized employees make more money hourly than those who are at unions (via @Sawyer Merritt).

In the segment, Sorkin said, “It appears by my math that on average, Tesla employees, who are non-unionized, appears on an hourly basis may be making more money than unionized workers for example at GM.”

Sorkin later continued, “You’ve spent a lot of time with this administration. They’ve had a number of meetings around EVs; Tesla has not been invited to those meetings. Do you know why that is? Do you sit there and say this is a little strange given the role that [Tesla has] played.”

Last month, Barra said that GM would “absolutely” be able to catch up with Tesla’s U.S. EV sales on CNBC’s Squawk Box, having announced weeks earlier GM’s plans to double its annual revenue by 2030 in a renewed push towards the EV sector.

Elon Musk responded to the segment to say, “this is true,” while also noting the health insurance, stock and other benefits for Tesla’s non-union employees.

This is true. Also, Tesla employees get health insurance, stock & other benefits.

You can watch the full New York Times segment below.

Domino’s announced plans to order custom-branded Chevy Bolt electric vehicles, set to receive 100 this month with 700 more rolling out in the coming months, according to a press release from the pizza company on Monday. The fleet will consist of 2023 Chevy Bolt EVs, which are set to arrive at select franchise and corporate […]
Peter McGuthrie
1 day ago

Cruise has launched driverless rides during the daytime in San Francisco, with the first ride taking place on Thursday at 8:30 a.m., according to co-founder @Kyle Vogt. The post includes a video detailing the first ride, showing actually footage from the ride and reactions from some of the company’s employees using the daytime driverless ride. […]
Peter McGuthrie
5 days ago

General Motors is “pausing” all paid advertising on Twitter after Elon Musk completed his $44 billion USD acquisition of the social network and assumed corporate control on Thursday — reports CNBC. The veteran automaker told the outlet that it will maintain a presence on the platform and continue to interact with customers as it evaluates […]
Nehal Malik
3 weeks ago