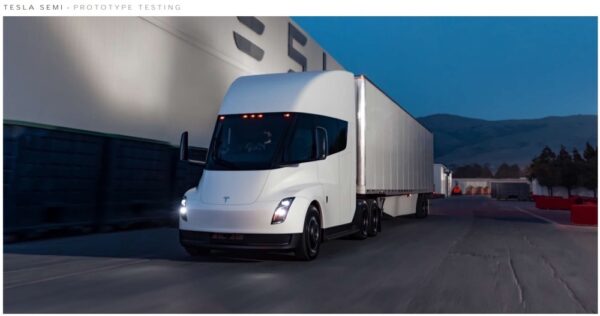 Reports from earlier this year showed that PepsiCo was set to receive 15 Tesla Semis by the end of 2021, and while this estimate was stated before Tesla seemed to further delay the electric semi-truck, Pepsi’s head seems to be saying it’s still on target.

Pepsi’s Chief Executive Officer (CEO) Ramon Laguarta said on CNBC’s “Squawk Box” that Tesla will be delivering the initial round of Tesla Semis to them in the fourth quarter of this year – although Tesla has publicly said that Tesla Semi deliveries would only begin in 2023. (via @Sawyer Merritt).

The news comes either as a special deal between the two companies or as something incorrect that was stated on the show.

BREAKING: Pepsi CEO just said on CNBC that Tesla will be delivering Tesla Semi’s to them in Q4 of this year despite Tesla saying that deliveries will start in 2023. pic.twitter.com/4k5ZkEZjIa

In a follow-up to the tweet, @Merritt also pointed out a recent Tesla Semi Megacharger stall as Gigafactory Nevada, which he uses to point to the possibility that the rumor may not be incorrect at all.

The original PepsiCo order was placed in 2017 for 100 Tesla Semis, though the initial delivery is expected to include 15 units.

Earlier estimates for the Tesla Semi rumored that it would start production in August, though it’s unclear whether or not that came to pass.

Still, the Tesla Semi has been spotted testing around the San Francisco Bay Area delivering other Tesla vehicles, along with a range of other tests taking place at Tesla’s production facilities.