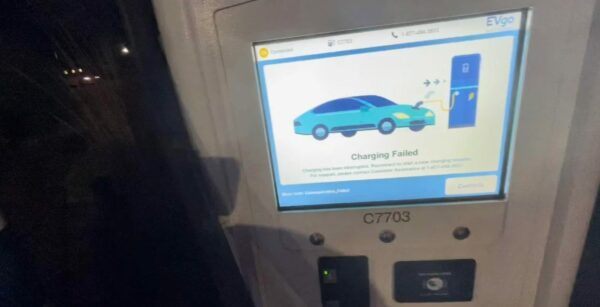 Tesla made it possible for other electric vehicle (EV) brands to charge non-Teslas at Superchargers in the Netherlands earlier this week, though in a recent update, one Tesla driver was struggling to get their vehicle to charge in a variety of non-Supercharger charging stations.

One Tesla Model 3 Standard Range Plus (SR+) driver shared on Thursday that its charging session while using an imported Tesla CCS1 adapter from South Korea, does not work at numerous third party charging stations in the United States (via Reddit).

While the user reported that the charging session was a test, they also had just 8 miles of charge left upon the test, though they were able to make it next door to an actual Tesla Supercharger. Reddit user ‘Kanzaki_Mirai’ said they were driving aggressively to lower their Model 3’s state of charge, to prepare for these tests with the CCS1 adapter.

In addition to the photographed charge attempt, the user reported trying one ChargePoint as well as three other charging stations including EVGo and Electrify America, though none were able to start a charging session.

Most users in the thread, including the original poster, speculated that the problem may have had to do with the CCS1 communication protocol not yet being supported by Tesla’s vehicle software as of yet.

One user also noted that, when the Model S in the EU didn’t have CCS2 support yet, the Model 3 was already being sold with the CCS2 port – suggesting that maybe a similar case is happening in North America with CCS1 charging adapters.

It’s worth noting this is a Tesla Korea CCS1 charging adapter, that was never advertised to be compatible in the U.S., but it’s interesting to see someone testing this out…for the sake of science.

With Tesla’s AI Day coming up on Friday, many onlookers are wondering what special announcements and new updates the event could hold. After tweeting the AI Day 2022 poster on Wednesday, Tesla CEO Elon Musk shared a few more details about the event. @ElonMusk retweeted the Tesla AI Day 2022 poster, adding that the event […]
Peter McGuthrie
17 hours ago