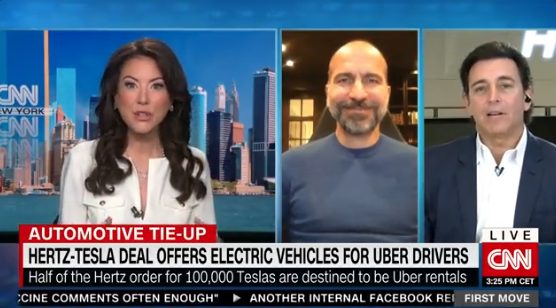 Earlier this week, Hertz announced plans to purchase 100,000 Tesla vehicles in a $4.2 billion USD deal, which are set to deliver by the end of 2022 – and the company’s head said that number could still grow.

Hertz Interim CEO Mark Fields said on Wednesday that Uber drivers who rent a Tesla from Hertz will gain a one-dollar bonus per ride given, according to a segment with @Julia Chatterley at CNN.

In the conversation, Fields and Chatterley spoke with Uber CEO Dara Khosrowshahi about the partnership, emphasizing that the recent deal could just be the beginning.

During the segment, Fields said, “Over the next three years, this could grow to 150,000 Teslas that can be provided by Hertz to Uber.”

Plus, no self-driving options included for now! 🚘

Fields also reported that the Teslas will not include the company’s self-driving feature, though he declined to comment on whether Hertz paid full price for the vehicles – despite Tesla head Elon Musk confirming earlier this week that Hertz did, in fact, pay full price without discounts for its Tesla fleet.

The interim CEO also explained to CNBC how its new Tesla fleet will give it an edge over the competition, as it learns how to manage a massive EV fleet.

One hedge fund manager called the deal a “win-win” for Tesla and Hertz earlier this week, emphasizing that the transition to clean energy will require cooperation from old and new companies alike, and that this deal was an excellent example of that.