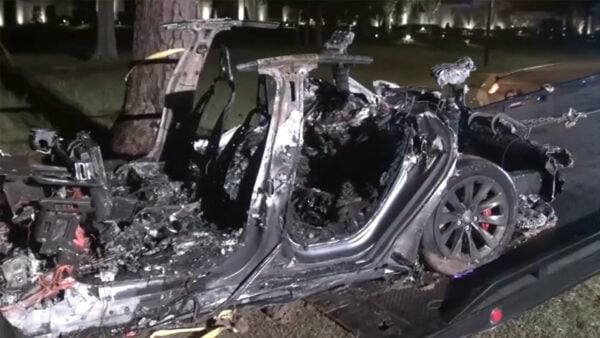 Following a fatal Tesla Model S crash that took place in Texas and led to a serious car fire in April, a U.S. agency investigating the accident has maintained that a driver and passenger were present during the crash.

While a witness statement noted that nobody was in the driver’s seat during the accident, the National Transportation Safety Board (NTSB) said on Thursday both the driver and passenger seats were occupied during the April 17 crash, according to Reuters.

The crash occurred in Harris County, Texas, and authorities originally reported being “confident” that no one was driving the Model S when the accident happened.

After reviewing vehicle data and performing a forensic examination of both the steering wheel and the vehicle’s data, the agency found that the driver was going 67 mph in the five seconds prior to the crash.

In the report, the NTSB said, “both the driver and the passenger seats were occupied, and that the seat belts were buckled when the (event data recorder) recorded the crash.” The NTSB continued, “the driver was applying the accelerator in the time leading up to the crash; application of the accelerator pedal was found to be as high as 98.8 percent.”

The agency also said “no conclusions should be drawn” from the recent update regarding how the accident took place.

The NTSB said its Recorders Laboratory was able to repair the Tesla’s event data recorder and take out critical precrash info.

Following the original incident, several news outlets reported falsely that the fire caused by the accident had burned for hours, though the Fire Chief later corrected the reports, saying it had been put out in minutes.

Back in September, an autopsy report revealed one of the victims had a blood-alcohol level that exceeded the legal limit.

Take a look at all of the new Tesla Superchargers that went live across the globe this past week, courtesy of data from Supercharge.info and the TMC Forums: Date Opened Location Number of Stalls Power Rating Official Listing September 26, 2022 2 Rua do Miradoiro, Vigo, Pontevedra, Spain 12 250 kW Tesla September 26, 2022 Strevelinsvej 13, […]
Nehal Malik
8 hours ago