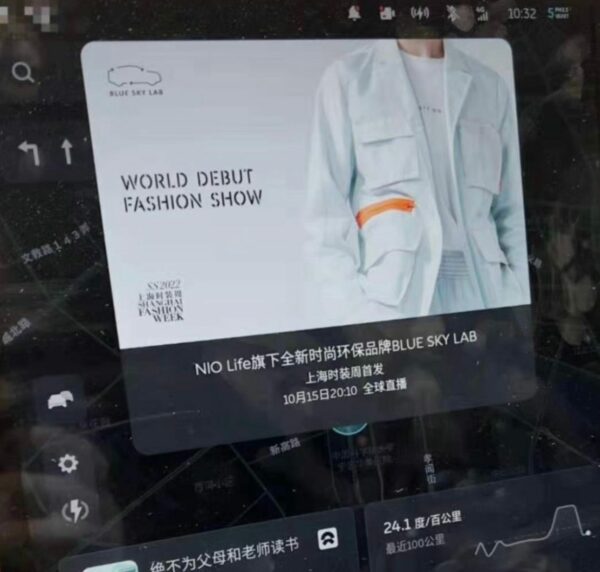 Photo: Weibo (via The Kilowatts)

A notification showed up for NIO drivers this morning that is believed to be an ad, in what some are calling a strange first for the electric vehicle (EV) industry.

On Wednesday, NIO pushed what appears to be an advertisement out to customer service vehicles in China, according to a post on Weibo (via @TheKilowatts). The notification appeared for NIO drivers, forcing them to watch a few seconds of the message labeled, “World Debut Fashion Show.”

In what we believe to be an industry first, @NIOGlobal pushed an in-vehicle ad to customer vehicles in China this morning! 👀
Source: https://t.co/i5NzdES1dP pic.twitter.com/F0cY9F8nke

The logo in the corner shows a vehicle drawn by directional contour lines, citing the company Blue Sky Lab. Users on the Weibo thread, including the original poster, discussed whether the notification was an advertisement or not.

The original post on Weibo says, “Has the owner of Weilai specifically talked about this pop-up advertising experience? The user is forced to watch the countdown for a few seconds, can I skip it? Just get in the car? Or just open the navigation.” The post continued, “If it is really a pop-up advertisement, then you will be scolded one by one, until no car company dares to do so.”

NIO’s popularity in China has increased significantly in recent months, alongside that of Tesla’s.

What do you think? Would you want to receive in-car ads inside your electric vehicle? That you already paid for?!