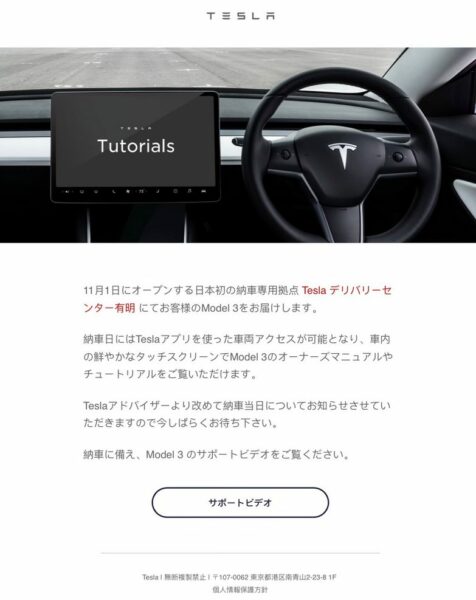 In April, sales of the Tesla Model 3 in Japan surged 1,300 percent year over year, and, subsequently, that trend has apparently continued as the company has also announced plans to open its first delivery center in the country.

Tesla is set to open its first dedicated vehicle delivery center in Japan, according to an official email from Tesla Japan shared by @Sawyer Merritt. The facility will be located in Ariake, Japan, and will be opened on November 1, 2021, according to the email.

BREAKING: Tesla will be opening their first dedicated vehicle delivery center in Japan, located in Ariake, on November 1, 2021. The official email from Tesla Japan is below. A couple of my followers who ordered Teslas reached out to me with this great news! pic.twitter.com/SAN4ycD7HL

Tesla’s vehicle deliveries aren’t the only part of its business that is growing in Japan. In August, Tesla’s energy storage business also announced plans to partner with Japanese companies to develop an energy storage plant in Hokkaido.

We will deliver your Model 3 at Tesla Delivery Center Ariake, Japan’s first dedicated vehicle delivery base, which will open on November 1. On the day of delivery, you’ll be able to access your vehicle using the Tesla app, and view the Model 3 owner’s manuals and tutorials on the vibrant touch screen inside the vehicle. Please wait for a while as Tesla Advisor will inform you about the day of delivery. Watch the Model 3 support video in preparation for delivery.