Following a 1,000-mile race that took place last month between a Tesla Model S Plaid, a Ford Mustang Mach-E, and a gas-powered Audi Q5, Marques Brownlee (@MKBHD) has officially unveiled the footage from the race on YouTube.

On Thursday, @MKBHD shared a 20-minute breakdown of the 1,000-mile race, showing how the gas car did against the electric vehicles (EVs) in terms of time and overall range, and how Electrify America charging performed compared to Tesla’s Supercharger network.

In the video, Brownlee compared various aspects of what made the trip turn out the way it did, including the overall order of each car, and how far apart each car’s arrival was – as well as any hiccups faced from charging along the way.

As you can expect, the Audi Q5, being a gas car, took the shortest amount of time, though the Tesla Model S Plaid wasn’t far behind – taking just about an hour and a half longer total on the trip than the Q5.

The Ford Mustang Mach-E, however, took a total of 18 hours and 39 minutes longer than the Audi Q5, largely due to unreliable charging hardware and a shorter range than the Model S Plaid.

The in-car navigation within the Mach-E led to numerous chargers that just simply did not work or were not operational. The drivers of the Mach-E ended up only navigating to Electrify America chargers for the second leg of the race, as they did not trust what was being recommended by Ford. 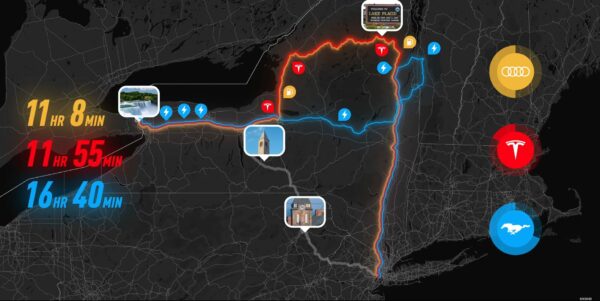 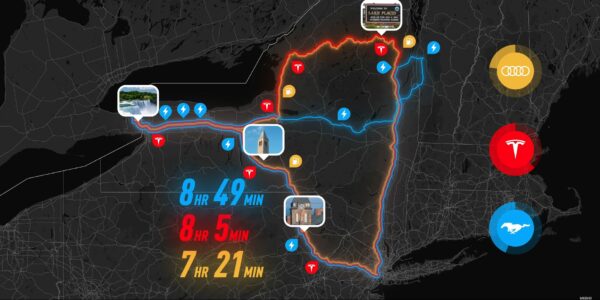 Another major detail discussed by Brownlee is how much the accuracy of the information in the EVs made a difference, especially on the first leg of the trip.

While each Tesla Supercharger station worked that was shown on the Model S Plaid’s infotainment screen, the Ford was not so lucky.

The Mach-E faced about five different charger malfunctions along the trip, which could be avoided by using apps on a personal phone to navigate, including relevant information about chargers that are down for maintenance or are otherwise not working.

The video shows how Tesla’s Supercharger network and in-car navigation to these chargers is by far the leader in the electric vehicle space at the moment, while legacy automakers try to keep up with Elon Musk and company.