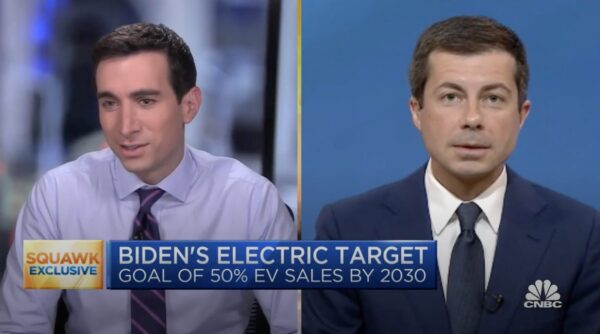 On Thursday, Biden’s Transportation Secretary Pete Buttigieg was asked why “one car manufacturer was conspicuously absent,” in reference to Tesla, to which Buttigieg responded “I’m not sure”, according to CNBC.

Those who were invited to the meeting consisted only of legacy automakers, specifically including executives from General Motors (GM), Ford and Chrysler parent company Stellantis.

Buttigieg also emphasized the legacy automakers transitions to EVs in his response, saying, “Part of what’s exciting is seeing some of the oldest most traditional names in auto manufacturing, and the newest companies on the scene, all acting in terms of the core of their business to go electric.”

The future of the auto industry is electric — and made in America.

Today I'm signing an executive order with a goal to make 50% of new vehicles sold by 2030 zero-emission — and unveiling steps to reverse the previous administration’s short-sighted rollback of vehicle standards.

Last month, Biden pledged to end $90 billion in gas company subsidies, just a few months after announcing an infrastructure plan with $174 billion going towards EV production and charging, among other things.

A 30-foot long, 12,000 lb metal sculpture featuring Elon Musk’s face atop the body of a goat riding a rocket has been spotted on the streets of Austin, Texas (via Fox Business). The statue was commissioned by a group of cryptocurrency enthusiasts who created a project called the “Elon Goat Token.” They wanted the sculpture […]
Nehal Malik
17 hours ago

Tesla CEO Elon Musk said on Saturday that the company has successfully completed its first 500-mile test drive of a Semi truck with a full load. With its haul, Musk noted that the vehicle weighed in at a whopping 81,000 lbs (or 40.5 tons). Tesla team just completed a 500 mile drive with a Tesla […]
Nehal Malik
20 hours ago