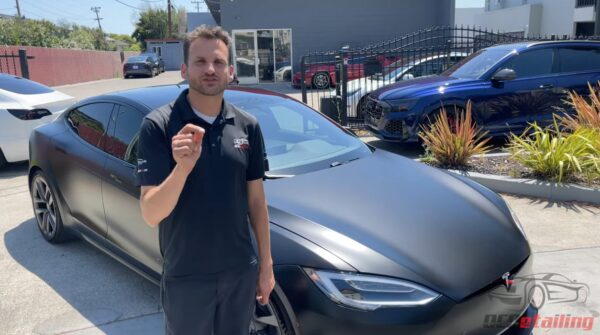 A number of awesome custom Tesla paint jobs and wraps have popped up from third parties over the years, including this Model 3 holographic wrap spotted last year, but a recent stealth paint protection film offers one of the coolest looks we’ve witnessed so far.

A new video from OCDetailing shared on Wednesday shows a Tesla Model S Plaid being outfitted with a stealth paint protection film in matte black, for a sleek, clean look and improved paint detailing.

The video’s host, Joe, says that the Model S Plaid “was covered in scratches and solvent pop” when first delivered from Tesla’s factory, which was why the team decided to apply the protective paint.

Tesla’s Gigafactory Berlin, set for completion later this year, will reportedly have the “world’s most advanced paint shop” according to statements from CEO Elon Musk last year. Despite this, Tesla’s paint and exterior paneling have both been famously criticized by figures like Sandy Munro in the past.

In April, RSymons RSEV compared the paint on Tesla Model 3 units made in the U.S. to those in China and found that the U.S. panel was thicker than the one made in China.

You can see OCDetailing’s quick three-minute video applying the matte black stealth paint protection film on a Tesla Model S Plaid below. It looks like the ‘Batmobile’ version of the Model S Plaid.