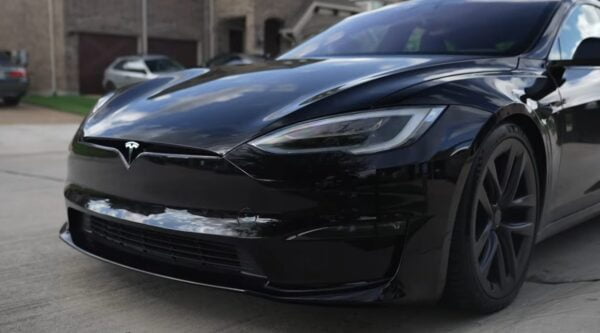 The Tesla Model S Plaid has been getting rave reviews since its release in early June, and in a recent review, the host says nothing less of the electric sedan.

In a new review of the Tesla Model S Plaid shared Tuesday by The Pollard Family, tRoland Pollard called the electric vehicle (EV) the “best car that has ever been created, invented, or produced” noting its quick acceleration – even at lower neighborhood speeds.

In a full review of the vehicle’s interior, exterior, and performance, Roland also mentions Tesla getting rid of the red brake caliper on Model S and X units, which, like many, he says he wishes he could have had. Still, he has great things to say about the external appearance of the car, in general, especially after removing the front license plate holder.

The video also shows brief footage of Roland’s wife, Stephanie, launching into Plaid Mode, in which she was afraid to go beyond 40 mph – and understandably so, because it accelerates really quickly.

Inside the car, the host also notes a broken center compartment, though he later says it’s “not a huge deal,” despite not being able to keep it open and use the cupholders.

Roland goes on to cruise around the neighborhood, talking about various aspects of the Tesla Model S Plaid and how it feels.

After a Delaware judge set Tesla CEO Elon Musk’s deposition for this week, the opportunity for the billionaire to answer questions under oath has been pushed back to next week. Musk’s deposition for an upcoming trial with Twitter has been rescheduled to October 6 and 7, according to a filing with the court on Tuesday […]
Peter McGuthrie
5 hours ago

Although Tesla CEO Elon Musk has previously said he hopes to shift away from end-of-quarter sales pushes, the automaker is expected to have another huge batch of deliveries heading to customers to end the third quarter. Musk apparently sent an email to employees requesting help for a “very high volume” of third-quarter deliveries, and analysts […]
Peter McGuthrie
6 hours ago