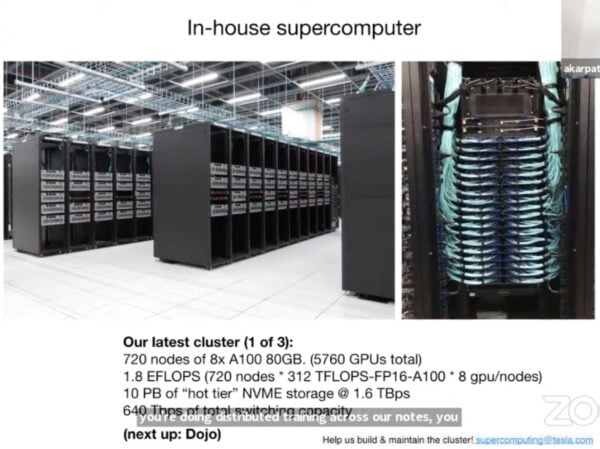 Advanced driver assistance systems like Tesla’s Autopilot use a lot of hardware to collect, store and use data, as shown in a recent post from one of Tesla’s engineering managers.

At #Tesla Autopilot we are bringing up our 3rd cluster – one of the biggest supercomputers in the world. We're scaling fast and hiring, if interested please DM (ml/py/cpp/gpus/cuda/react/devops/sre) https://t.co/EwN5vHZaCe pic.twitter.com/H5QiLkklCf

In the post, Zaman also said the company was “scaling fast and hiring,” and to DM him if interested. Specifically, Zaman went on to list those with skills in CPP, GPUs, CUDA, React, DevOps, or SRE – including a link to the streamed CVPR 2021 Autonomous Driving Workshop from which the shots came.

In general, anyone interested in working on physical-word AI problems, should consider joining Tesla. Fastest path to deploying your ideas irl.

The video also included a line of text encouraging onlookers to reach out to “help us build & maintain the cluster,” including the email supercomputing@tesla.com, to which interested parties can reach out with job candidate information.

Tesla recently started rolling out vehicles with camera-based vision, rather than its previous vehicles which were outfitted with some radar hardware elements.

How to Make Your Own Tesla Key Fob From Key Card

New SpaceX Droneship ‘A Shortfall From Gravitas’ Gets Deck Extension