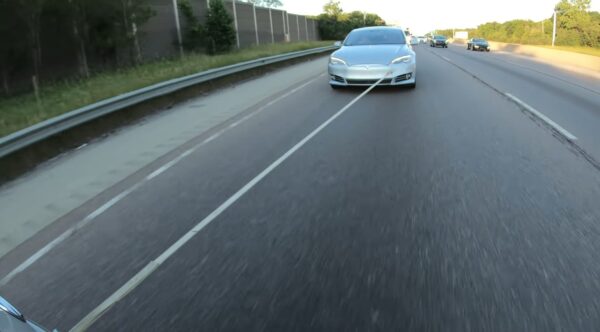 Tesla’s regenerative braking can produce as much as 65,000 watts of power when fully charged, which is effective enough to act as a Supercharger and get the electric vehicle (EV) back to partial battery capacity, as shown in a new video.

On Wednesday, Warped Perception shared a video towing his Tesla Model S, and using the 65,000 watts produced from the regenerative braking to effectively charge the vehicle’s engine batteries. The host shares doubts about the effectiveness of the test, but it doesn’t take long for the setup to impress onlookers, himself included.

The host of the video uses a Mercedes e55 AMG to tow the Tesla Model S, and despite expressing concerns about the sedan overheating, he manages to successfully tow the Model S – while using the regenerative braking to charge itself, and with the help of one other person.

Within just 20 miles of towing and charging, the Model S is already almost 50 percent charged, and the regenerative braking is still running at 65,000 watts of power, despite having been going 70 mph on the freeway (after having the Mercedes refuel!).

While we have seen some Teslas towing other trailers, this is the first video of its kind, using a Tesla being towed to actually generate power from the vehicle’s regenerative brakes on the highway (and not a test track).