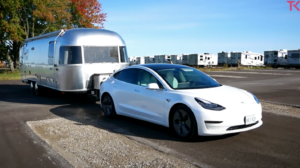 We recently shared a video of a Model X towing an airstream, but a new video has come to light with another Tesla model doing an Airstream’s bidding.

A Tesla Model 3 tows an Airstream trailer in a new video released by YouTube channel Truck King, and as shared on Reddit by user Swagnum_Pl.

In the video, which was shot in and around London, Ontario (Canada), the host meets up with Andy from the city’s Can-Am RV Centre to talk about towing with a Tesla. Andy sheds some light on different towing vehicles, efficiently towing, and how a Tesla Model 3 actually makes for a decent tow.

The original Reddit poster also commented on the thread, stating that they had contacted the trailer company, who recommended not using a 27-foot trailer like the one depicted in the video, but said a 23-foot Airstream would be “totally fine.”

Regarding the vehicle’s range and efficiency, as well as the trailer’s hardware, the user commented, “In the comment section of this video they say he gets about a hundred miles of range. Not bad considering the fact he’s towing 6,000 lb.” The user continued, “Also the trailer was equipped with an aftermarket brake controller.”

In spite of an aftermarket brake controller, the Model 3’s towing performance is pretty incredible to say the least – towing that much weight seems like it shouldn’t be possible for an all-electric sedan. And yet, it is.