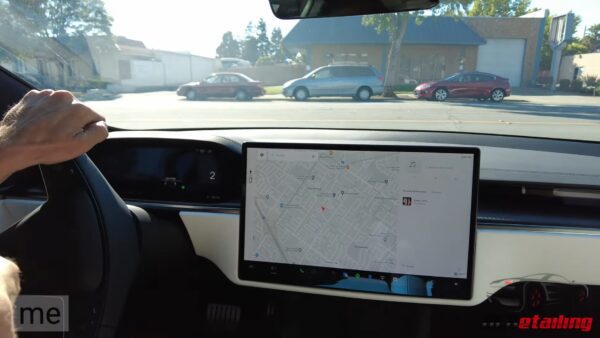 In a new video shared on Monday by YouTube channel OCDetailing, the host, Joe, takes a Tesla Model S Plaid for a quick spin to the shop’s other location, talking through the elements of using the steering yoke and the car’s automatic shifting into park when the seatbelt is removed feature, and drive when it’s time to go forward.

Rather than a shifting stalk, the vehicle includes touchscreen buttons for shifting, as well as sensors that are supposed to determine when it’s time to shift and do it automatically for the user.

Joe’s first thoughts on using the yoke steering wheel when turning are that it “feels a little awkward,” adding that the driver can’t just let go of the wheel and let it spin back into place naturally the same way as with a normal car.

At one point, Joe prepares to back up, thinking that the Model S Plaid would know he wanted to back up and thus shift for him, though he has to manually shift into reverse instead. As it turns out, the automatic shifting applies strictly to the initial shift out of park, as well as a shift back into park when the driver’s seatbelt is removed.

Check out the nearly 9-minute video below for a good look at how the new yoke steering wheel feels like on a first-drive: