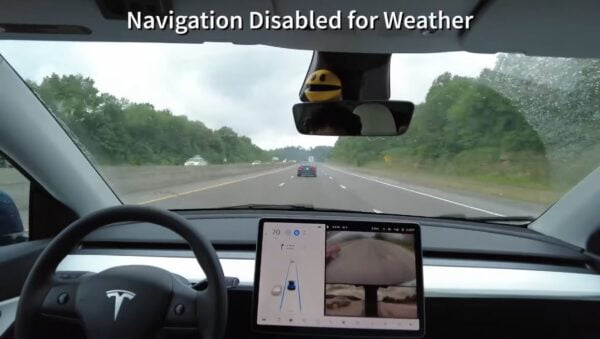 In a new video uploaded on Monday, Kevin Smith test drove his camera-sensing, radar-less Model Y in the rain to see how Autopilot holds up.

Using a Model Y produced in May 2021 running software version 2021.4.18.1, Smith drives around highway 65 in relatively light rain, while the Autopilot functionality seems fine until it starts heavily raining.

Tesla began producing models without radar last month, and has instead elected to use camera-based sensors sporting Pure Vision, often referred to as Tesla Vision.

In the video, we can see the Autopilot occasionally limiting speed as a result of low visibility, as no radar is available to further assist. We can also see a number of times in which the navigation system automatically disables itself because of the weather

One commenter said, “Took my radarless Y on a ride in the rain a bit ago, I wanted to test the autopilot (non-FSD) and automatic rain wipers while dark & raining. To my surprise, it did well at seeing the lines with completely wet and dark roads.
It slowed down from 35mph to 30 at a couple spots, both were small hills where other side could not be seen until right at top of hill. Let’s hope it keeps improving.”

You can watch Smith’s full radar-less Model Y rainy day Autopilot test below, with things ‘turning real south’ as he puts it at the 14-minute mark:

Tesla’s Cybertruck uses steel made by Steel Dynamics, according to a plaque at the Petersen Automotive Museum display for SpaceX, spotted by @Teslaadvisor (via @Sawyer Merritt). The news comes after Steel Dynamics denied involvement with the Tesla Cybertruck in January, saying that the company was currently not an “approved supplier” of stainless steel, though it […]
Peter McGuthrie
1 hour ago

Kevin Chau (@kchau), who makes a hobby of scouring service manuals and related documentation to find interesting information, recently found that the front and rear castings, among other things, of Tesla’s new Model Y design with 4680 cells and a structural battery pack are highly repairable (and can even be replaced). The new structural battery […]
Nehal Malik
15 hours ago

Tesla on Saturday filed for a voluntary recall of more than 321,000 Model 3 and Model Y electric vehicles (EVs) with the U.S. National Highway Traffic Safety Administration (NHTSA) for a potential glitch with taillights that could cause them to not light up properly — reports Fox Business. On Friday, the all-electric automaker also issued […]
Nehal Malik
21 hours ago