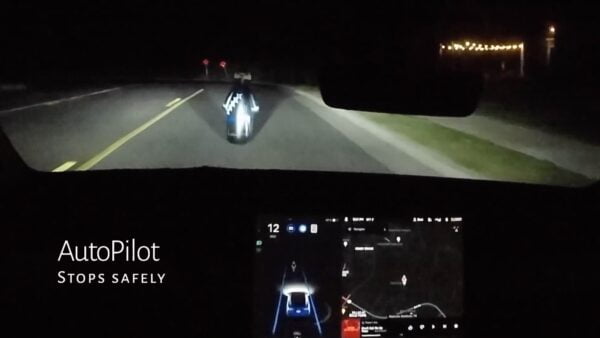 After Tesla rolled out its pure vision cameras to replace radar technology, many customers are out on the road testing the technology when it comes to Forward Collision Warnings (FCW) and Automatic Emergency Braking (AEB).

A new video from Kevin Smith shows updated tests during both daytime and nighttime with a Tesla Model Y equipped only with camera sensing vision, ultimately to see how the car’s FCW and AEB compare with the radar sensing technology previously stock with the vehicles.

In the video, Kevin tries two separate tests for each day and night – one with Autopilot activated, and one without it.

Performed at a dead-end street with permission from those who manage the road, Kevin uses a small inflatable ninja and an inflatable clown as his “pedestrians.” Luckily, they aren’t real ones given the infancy of the newly-camera-based technology.

With Autopilot engaged, both day and night, the Model Y both sees the inflatable from far out, and performs an AEB, slowing to a stop before the pedestrian.

In contrast, with Autopilot disabled, we see one nighttime test providing only a FCW, while the other two provide both an FCW and AEB – although the Model Y doesn’t quite stop in time to avoid hitting the inflatable. For whatever reason, however, the daytime tests without Autopilot also provided only a FCW but not an AEB.

Kevin also has Tesla’s software 2021.4.18.1 running in his Model Y, an apparent update since his last video. You can see his full video testing the new Tesla Vision with cameras below: