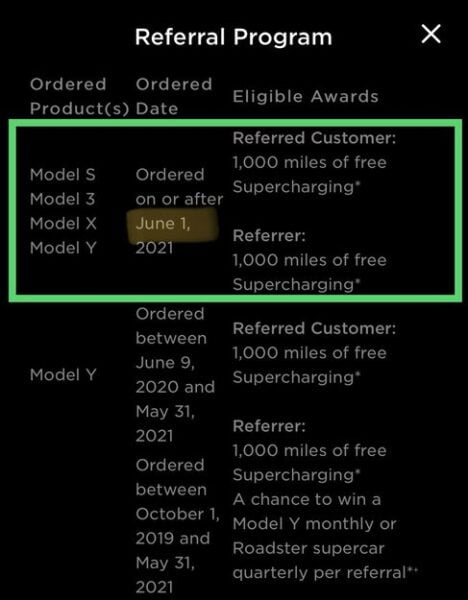 According to @TeslaGong, Tesla has changed its referral program as of June 1, no longer offering a monthly draw for a free Model Y, or a quarterly draw for a Roadster.

While Tesla CEO Elon Musk has said in the past that the referral programs were not sustainable, the company has used these referrals to help spur along the mainstream adoption of electric vehicles (EVs) – and it has largely worked.

From 1st June 2021
– 1000 miles / 1500 kms of Supercharger credit. No mention of Model Y@elonmusk has earlier pointed out that the referral program in the long run is unsustainable.

Soon, according to Tesla, all referral links will be entirely removed from social media, though, for now, referrals will continue to happen via the Tesla app – with the company also planning to add app features for non-owners like test-driving and more.

Tesla led global sales in this year’s first quarter, which is a testament in and of itself to how effective the company’s referral programs were, even as the company begins to phase them out of its sales plans.

Tesla announced on Wednesday it has added a new member to its Board of Directors—Airbnb co-founder Joe Gebbia. This was made effective on September 25, 2022. The electric automaker shared a bio of Gebbia on its website today as part of the announcement: Gebbia, a designer and entrepreneur, has spent the last 14 years of […]
Sarah Lee-Jones
7 hours ago

With Tesla’s regular software updates come gradual improvements, and one new version builds off of the automaker’s recently improved navigation system in its vehicles. Tesla added suggested destinations in its software update version 2022.28.2, as detailed in a report on Wednesday from Not a Tesla App. In the report, the publication notes a user named […]
Peter McGuthrie
17 hours ago

As Tesla continues with plans to open its Superchargers to non-Tesla vehicles, the automaker plans to shift its charging rates and times at certain locations. Tesla is updating its charging rates at select Supercharger locations starting on Wednesday, September 28, according to tweet spotted by @Whole Mars Blog. In the screenshot, Tesla says that users […]
Peter McGuthrie
17 hours ago