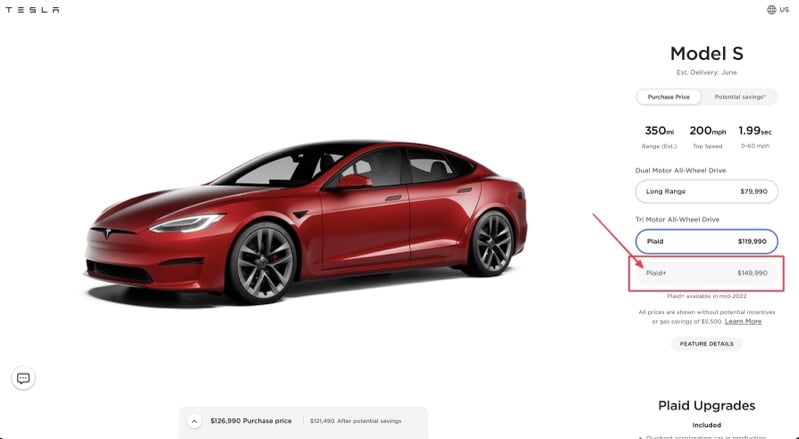 Tesla appears to be limiting new sales of its Model S Plaid+, as the option has been greyed out on the company’s American website (via @SawyerMerritt).

“I’ve been told by a source that Model S Plaid+ deliveries are estimated to begin in Mid-2022, not end of 2021,” said Merritt on late Thursday night. “Also, Tesla stopped taking orders for the new Plaid+ due to high demand. This stoppage is temporary. Also, I’ve confirmed the new S will deliver with the yoke,” claimed Merritt, known to have reliable sources in the past.

BREAKING: Effective starting today, the Tesla Model S Plaid+ will by greyed out for new Model S orders and will prevent customers from ordering this trim. Tesla has also increased the price of all non-performance trims of the Model 3 and Model Y by $500. pic.twitter.com/9cIDb8F8LT

Tesla also again increase the price of Standard Range and Long Range versions of its compact sedan and crossover SUV, with increases of $500 USD. This price change comes two weeks (again) after the previous increase from May 6, also a $500 hike.

Check out the price changes below:

Other changes tonight from Tesla? The company has also removed the referral link, referrals and the entire section regarding referrals from some people’s accounts, explains Merritt.