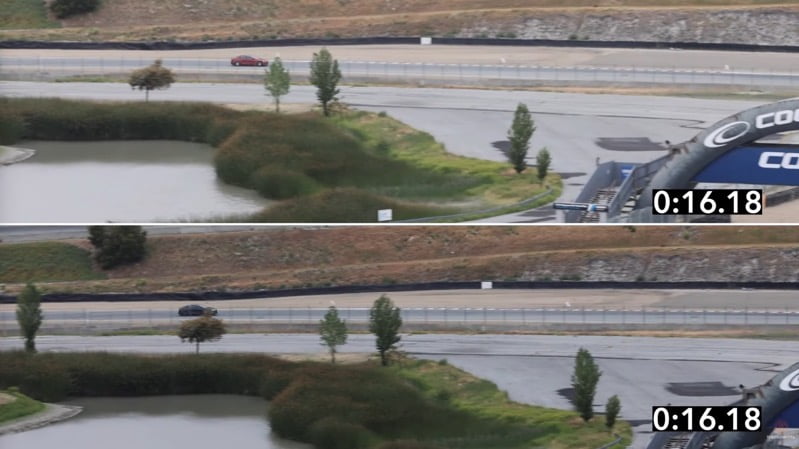 After sharing images of what appeared to be Tesla Model S Plaid vehicles at Laguna Seca Raceway in California, The Kilowatts have now shared a video of the apparent electric vehicle lap record of 1:29.9.

“After whipping out our camera, we began capturing photos and video from the top of the Corkscrew. During our time at the Corkscrew, we filmed several laps and have compiled the two quickest laps from each test car here,” said the YouTube channel.

“Please keep in mind, these times are unofficial and unconfirmed. Tesla or Laguna Seca may confirm these times at a later date but this footage and the times associated have yet to be validated or confirmed. It is also possible other laps we were not present for were even quicker!”, says The Kilowatts.

The raw footage taken from the camera below was only modified to show both Tesla Model S refresh vehicles side-by-side.

The top part of the screen shows a red Model S refresh, possibly either a Plaid or Plaid+ version with a gnarly adjustable rear wing, that set the apparent 1:29.9 record lap time. The bottom of the video shows the black Model S with a lap time of 1:32.6.

Tesla is expected to start delivering its Model S refresh starting next month.

Next Tesla Model Y to Have ‘Extreme Precision’ Down to Microns, Says Elon Musk